Zach Wahls, who made a splash when his Iowa speech went viral on YouTube, continues to advocate for LGBT families – with a book and on Capitol Hill

”I think there’s no doubt that whatever the stereotype of two lesbians raising kids is, a clean-cut, engineering, Eagle Scout entrepreneur from Iowa probably isn’t that image,” Zach Wahls tells Metro Weekly.

Although that may have been the case before Wahls hit the scene, he has been working nonstop for the past 15 months to make that image exactly what people picture. 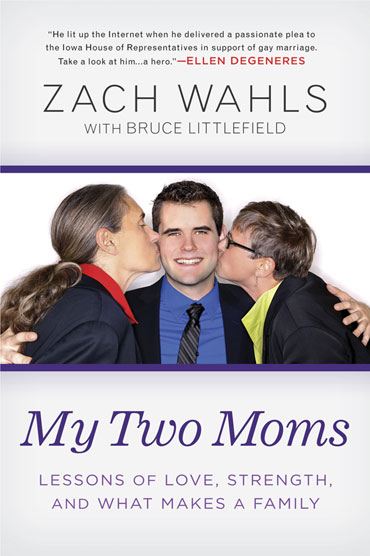 ”My Two Moms” by Zach Walls

When Wahls initially spoke out about his moms, Jackie and Terry, it was during a public forum on an Iowa resolution that would have moved the state toward a vote ending marriage equality there. As Wahls defended his family in the testimony, which was videotaped and uploaded to YouTube, he said, ”If I was your son, Mr. Chairman, I believe I would make you proud.”

Fifteen months and more than 2.5 million views later, Wahls has been all over the nation, recognized for his testimony and subsequent work by groups like the Human Rights Campaign and the Gay & Lesbian Alliance Against Defamation.

Now he’s written a book — My Two Moms: Lessons of Love, Strength, and What Makes a Family — that led Jon Stewart to gush over the Iowan during an appearance earlier this month on The Daily Show.

Among the aims of the book, he says, is ”reaching out to people who are still kind of on the fence and who think, ‘It’s a free country, and people should be able to do what they want, but how’s it gonna affect the kids?”’

Wahls answers the question by example, coming to D.C. Thursday, May 17, to help the Family Equality Council lobby Congress on LGBT family issues.

Family Equality Council spokesman Steve Majors tells Metro Weekly, ”We can think of no better spokesperson than children like Zach to go to Capitol Hill to talk with our members of Congress. He is the living embodiment of what three decades of social research has told us, that these kids are successful, thriving personally and professionally, and have the same outcomes and opportunities as the children of straight couples.”

Wahls says, ”We can’t forget how important policy is, if for no reason other than that the government does have a certain level of moral authority in the eyes of many, many Americans. That’s why I’m going to talk with these lawmakers who represent Iowa and have this conversation with them about what it means to be an American in this country who has LGBT parents and just try to move past some of the myths and the misconceptions and, quite frankly, the rhetoric that surrounds the issue.”

And Wahls isn’t done. Among his plans for the coming year are continued visits to speak across the country, ”crisscrossing Iowa talking to people, … going up to Minnesota doing the same thing ahead of the constitutional amendment fight that we have in the fall, and, beyond that, hopefully finding some time to relax. It’s been a crazy 15 months.”

He also hints at politics, saying that he would ”love to work in renewable energy” although there are ”a lot of people who would love to see me work in politics” — to which he says, ”The future is awfully hard to predict. I’m definitely keeping my options open.”

The highlight of his activism during the past 15 months, though, was not difficult for Wahls to pinpoint.