Wallace Corbett knows HIV better than most. As co-chair of the DC Community Coalition (DCC), a cross-section of people living with or affected by HIV/AIDS in the D.C. area who are preparing for Washington’s role as host of the XIX International AIDS Conference, aka AIDS 2012, Corbett sees the policy side of the disease. As an HIV-positive man, he knows the personal side as well.

He’s looking at both of those sides as he helps guide the DCC.

The coalition declares in its mission statement that is aims to ”utilize AIDS 2012 as an opportunity for increased accountability by all DC Metropolitan Area leaders.” Corbett says that means making sure local residents are involved with this immense conference attracting thousands from around the globe.

”The coalition doesn’t want to be a coalition just for the international conference,” says Corbett. ”The goal is that the DC Community Coalition will last after the conference, to ensure that those infected or not infected with HIV/AIDS are cared for correctly.”

To accomplish that goal, the coalition will be educating communities within the District about how to access the many resources – financial, medical and otherwise – available to residents infected with HIV. 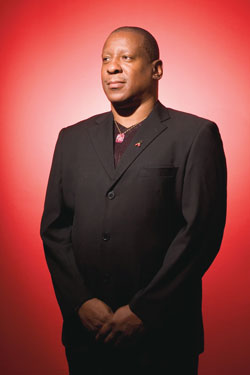 ”The District of Columbia has very progressive care for HIV/AIDS,” Corbett says. ”People need to recognize that, because once you go out of the District, the care sometimes becomes different. Even when it’s just across the bridge, in Virginia, that’s how close the line can be between treatment and non-treatment.”

While AIDS 2012 is sure to offer ample opportunities for networking, for the coalition that work has already begun in the form of partnerships with the Mayor’s Host Committee for the conference, and with the city’s HIV/AIDS, Hepatitis, STD and Tuberculosis Administration (HASTA).

Corbett also stresses the importance of engaging faith communities as partners to help combat HIV/AIDS, particularly when it comes to stigma.

To that end, the coalition is encouraging representatives of local faith communities to attend AIDS 2012 to better understand the roles they can play in combating HIV, and has planned a pre-conference faith outreach event at Howard University July 21 to 22.

While the DC Community Coalition will have plenty to absorb from all that’s presented at the conference, Corbett wants everyone to know that the coalition will be offering a substantial contribution of its own: ”Our Heroes.” This photo exhibit of more than 200 images relevant to the local fight against HIV/AIDS will be installed in the Carnegie Library, across the street from the Washington Convention Center, the primary venue for AIDS 2012.

”The District of Columbia has a huge story of HIV/AIDS,” Corbett says of the story behind the ”Heroes” exhibit. ”The only thing that people from elsewhere know is that we have the highest rate in the nation. But we’re people. We have stories to tell. We have journeys to discuss. We have things that others can learn, and things others can teach us.”

For more information about the DC Community Coalition, visit dcaids2012.org/wp/.

This is the first in a series of articles leading up to the XIX International AIDS Conference (AIDS 2012), to be held in Washington July 22 to 27. For more information about the conference, visit aids2012.org.