A spokesman for Marylanders for Marriage Equality, the coalition of groups working to defend the state’s recently passed civil marriage law, said the coalition is undeterred by the number of signatures opponents have successfully collected to force a November referendum aimed at repealing the law.

Opponents of marriage equality, led by the Maryland Marriage Alliance (MMA), announced on MMA’s Facebook page and Twitter feed on June 25 that they had submitted a new round of 39,743 signatures from petitions they had been circulating to force a referendum.

But Josh Levin, campaign manager for Marylanders for Marriage Equality, said a referendum was expected.

“As we expected, our opponents met the legal signature threshold and the Civil Marriage Protection Act will be on the ballot this fall,” Levin said in a prepared statement. “Since all Maryland families deserve the dignity and respect that marriage brings, we’re focused on building a smart, strategic campaign to amplify and mobilize the 57 percent of Maryland voters who support the new same-sex marriage law. Committed, loving gay and lesbian couples should be treated fairly under the law.”

In his statement, Levin referenced a May 2012 poll by Public Policy Polling (PPP) that showed that, following President Obama’s endorsement of marriage equality, attitudes among Marylanders had shifted. According to the poll, 57 percent of Marylanders saying they would vote to uphold the marriage equality law, and 37 percent saying they would vote to overturn it, up from a 52-44 margin in March. The poll also showed 55 percent of African-American Marylanders would vote to uphold the law, up from only 39 percent two months earlier.

The marriage equality law was signed into law by Governor Martin O’Malley (D) on March 1, following a contentious battle in the General Assembly that saw the measure pass each chamber with one vote to spare. It passed the House of Delegates on February 17 by a vote of 72-67 and the Senate on February 23 by a vote of 25-22.

Washington State, which passed a law similar to Maryland’s, will also hold a referendum to repeal or uphold the law in November. Maine, which legalized marriage equality before a 2009 special election that repealed the law, will feature a citizen-backed initiative to restore those marriage rights in November.

Marylanders for Marriage Equality, the coalition of groups fighting to uphold Maryland’s recently passed marriage equality law, announced on May 7 that they had opened new campaign offices and hired additional field staffers, part of several new measures the coalition has undertaken in preparation for a November referendum on the law. 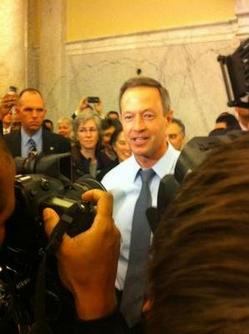 Over the past six weeks, Marylanders for Marriage Equality has opened two new campaign offices in Baltimore and Silver Spring, with plans to open additional offices in the future. The campaign hired 12 field staffers to work across the state. Those staffers will be responsible for recruiting volunteers and planning events where campaign workers can have one-on-one conversations with voters about the importance of marriage equality.

The coalition has also hired Rachael Stern as new media director as it runs targeted online ads asking voters to sign a pledge to defend marriage equality at the ballot box. According to a press release, the campaign has tripled its list of Twitter followers and doubled its number of Facebook “likes” since May 1.

An unofficial count of the signatures gathered for the referendum being kept by the Maryland Secretary of State’s office shows that the petition effort likely has succeeded. State Elections Administrator Linda H. Lamone told The Washington Post the statewide count has not yet been certified but that it “will probably go up” by the time that happens.

Josh Levin, campaign manager for Marylanders for Marriage Equality, said of his group’s efforts thus far to fight the referendum, “We’re at a very good place right now. We still have a lot of work to do and a long way until November, but the momentum is clearly with us. The smart, strategic work of the campaign staff, coalition partners and the governor is paying off.”

Gov. Martin O’Malley (D) signed the marriage equality bill into law on March 1, following months of contentious debate and two narrow margins of victory in the State House of Delegates and State Senate, including vocal opposition from black religious leaders, especially in Prince George’s County, where several delegates and senators voted against the bill.

According to a May poll by the North Carolina-based Public Policy Polling (PPP) commissioned by Marylanders for Marriage Equality, 57 percent of Marylanders would vote to uphold the law, while 37 percent would vote to overturn it. The poll’s margin of error is plus or minus 3.4 percent, marking a significant shift from March, when a similar PPP poll showed support leading by a slimmer margin of 52 percent to 44 percent, with a larger margin of error.

The May poll also found that, following the endorsement of marriage equality by President Barack Obama and the civil rights group NAACP, 55 percent of African-American voters would vote to uphold the law, up from 39 percent in March.

Marylanders for Marriage Equality has also highlighted the involvement of the National Organization for Marriage, which opposes marriage equality, and, according to financial disclosure reports, funded a significant portion of the Maryland Marriage Alliance’s signature-collection efforts. In particular, the coalition has focused on internal memos that were recently made public that encouraged finding African-American spokespeople to speak out against marriage equality and intentionally drive a wedge between blacks and the gay community. 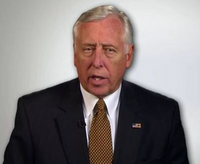 In response, Baltimore Mayor Stephanie Rawlings-Blake (D), one of the African-American leaders featured in the pro-equality videos, denounced NOM’s tactics and involvement in Maryland, saying, “Regardless of where you are on the marriage issue, there is no room for racial exploitation. Marriage equality is about building stronger families and protecting children of same-sex couples, and their efforts to divide Marylanders based on race is a tactic that will hurt us all.”

The coalition, which has emphasized the importance of sharing personal stories to connect with undecided voters, also hopes its efforts will be bolstered by support from Maryland U.S. Rep. Steny Hoyer (D-Mechanicsville) and his daughter, Stefany Hoyer-Hemmer, who recently came out publicly as a lesbian.

“I have been watching the momentum quickly build in recent weeks and want to do whatever I can to keep it going,” Hoyer-Hemmer said. “Hopefully, by telling my story, people will understand that thousands of Marylanders want the same opportunity to settle down, marry the person they love, and protect their children under the law.”

Rep. Hoyer said in a statement, “I am hopeful Maryland voters this fall will preserve the new rights and responsibilities of marriage that are on the books. All couples should be treated equally under the law, with the same rights and benefits afforded to everyone. I believe marriage equality reaffirms the dignity of all families, and is the next step in our continuing efforts to live up to our nation’s founding values of equality and justice.”