“Something new, something different, it’s a whole new family of computing devices from Microsoft.”

Steve Ballmer today at Microsoft’s secret product announcement in Los Angeles, introducing the Surface tablet — the company’s latest arsenal in its Windows 8 onslaught. Designed from the ground up to marry hardware and software in one harmonious package (much like a fruity tech company we all know), Surface is Microsoft’s way of introducing two very distinctive flavors of Windows 8 in one very appealing form factor. The new Surface tablet comes in two editions — one for Windows RT, the version built for ARM processors, and one for full-fat Windows 8 (Pro edition, in this instance), built for traditional x86 processors. 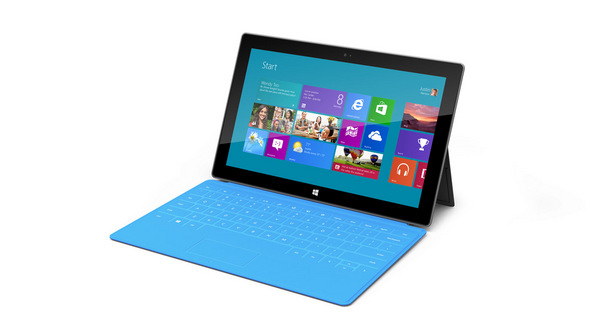 Both Surface tablets will feature a slender magnesium construction (labelled VaporMg), weighing under 680 grams on the RT model and just over 900 for the Pro version. Waistlines are kept in check at 9.3mm and 13.5mm (RT and Pro), but Microsoft still found room to include an integrated kickstand that allows for the Surface to be propped up in landscape mode. Measuring just 0.7mm (about the same thickness as a credit card) ensures the kickstand remains flush with the rest of the tablet casing.

The display is a 10.6-inch optically-bonded, ClearType display with an aspect ratio of 16:9 and wide viewing angles, all coated in Corning’s gorilla Glass 2 for added resilience. Curiously, while the Windows 8 Pro Surface will enjoy a Full HD 1080p resolution, Microsoft has confirmed the RT model will not be Full HD, instead using a lesser resolution (possibly as low as 1366×768).There’s also a micro-SD slot, micro HDMI and a full-size USB port on board, as well as front and rear HD cameras and 2×2 MIMO WiFi antennas.

As for the units’ insides, Microsoft was rather more secretive, only confirming the ARM interior of the RT Surface is made by NVIDIA (widely rumored to be the Tegra 3 SoC), while an Intel Ivy Bridge Core i5 processor is in the Windows 8 Pro model.

Also on display were two covers for the tablets, the Touch Cover and the Type Cover. Both feature a magnetic clip and full-size keyboard, the former being a multi-touch affair and the latter featuring actual keys, as well as trackpads and accelerometers.

A breakdown of features between the two versions is included below: