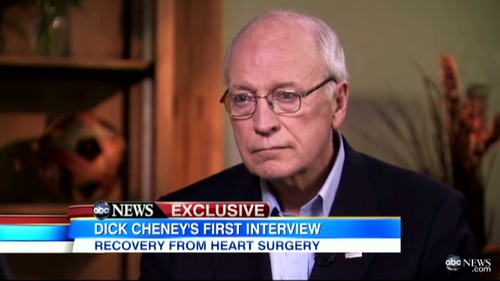 Despite running on the Republican Party platform in 2004 that supported a constitutional amendment banning same-sex marriage, Dick Cheney told ABC News that he supported marriage equality back in 2000 before becoming vice president.

In an interview that aired Monday on Good Morning America, Cheney questioned the point of drawing attention to his support for marriage equality during the 2000 election.

When asked if he wished he had pushed harder for marriage equality, Cheney responded, “Why?”

Last month, Cheney’s daughter, Mary Cheney, married her longtime partner, Heather Poe, in Washington. As Metro Weekly reported at the time, the couple’s marriage is not recognized in their home state of Virginia, where they are raising two children.

At the time of the wedding, the former vice president and his wife, Lynne, said in a statement that Mary and Heather were “much loved members of our family” and that they were “delighted that they were able to take advantage of the opportunity to have that relationship recognized.”

Asked how Mary and Heather’s wedding was, Cheney said he was “sure it was fine.”

“We wished them well. She wanted to avoid having it be a media circus or having it become part of the political debate,” Cheney said. “So Lynne and I were very proud and happy and congratulated them.”

Despite the president he served, Cheney supports leaving the issue of marriage equality up to the states rather than the federal government. Responding to a question about gay marriage at a campaign event in 2004, Cheney said “freedom means freedom for everyone,” adding that “people ought to be free to enter into any kind of relationship they want to.”