Without question, the International AIDS Conference, returning now to the United States for the first time since 1990, is a global affair. From far and wide, the scientists, advocates and activists will come to Washington for a week of nonstop discussions, plenary sessions, keynotes and networking related to HIV/AIDS.

But the particular flavor of the District of Columbia is unlikely to get lost in the mix, whether that’s locals building ancillary events to the conference, or directly joining the Walter E. Washington Convention Center mix. 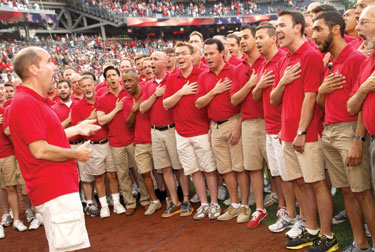 Take the Gay Men’s Chorus of Washington, D.C., for example. This will likely be one of the chorus’s busiest Julys on record, with the GMCW performing at a World Bank welcoming reception July 20, at the convention center July 22 for the conference’s opening plenary reception – streamed live starting at 6:30 p.m. via aids2012.org – and July 24 for Whitman-Walker Health’s ”Return to Lisner.” The chorus’s Potomac Fever a cappella ensemble pulls double duty, performing July 21 at the National Cathedral for the AIDS 2012/Names Project Interfaith Service.

”As an organization that has lost many members to the AIDS crisis over the past 30 years, it is an honor to be called upon to entertain and inspire the world leaders who have dedicated their lives to treat and prevent HIV,” GMCW Executive Director David Jobin offered in a GMCW statement marking the occasion. ”The fact that so many of our members have given of themselves over these summer months to prepare and perform when we are usually on hiatus speaks to the importance of the conference and to the honor of being asked to perform.”

The GMCW is just a taste of D.C. flavor, though. Another sort of AIDS 2012 entertainment is Sampson McCormick, who has been invited by the DC Community Coalition, local partner of AIDS 2012, to make ’em laugh.

”I’m honored they asked me to come down,” says McCormick, awaiting the final details for the show he expects to perform in the conference’s PWA Lounge. ”They don’t usually think to include comedy.”

That performance, he reckons, will likely be limited to registered members of the conference, like much of AIDS 2012. Right across the street from the convention center’s Mount Vernon Square main entrance, however, in the Carnegie Library, the DC Community Coalition will be setting up shop for the duration, open to all and sharing a perspective of the District through years of HIV/AIDS.

Just beyond the northeast corner of the convention center, the Metropolitan Community Church, at 474 Ridge St. NW, will mark the July 22 start of the convention with special ”MCCDC International AIDS Conference Worship Services, then open its doors through the week at 8 a.m. to offer attendees breakfast and morning services – as well as water and air conditioning through the week.