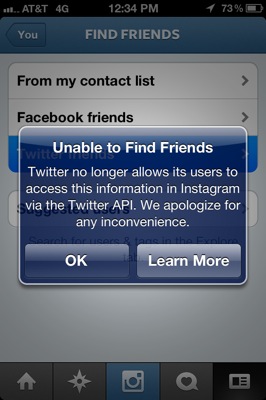 We’ve learned that the feature is missing due to API restrictions from Twitter’s end, restrictions that possibly came about over concerns about Instagram’s scale and its strain on data pulls.

The decision is especially perplexing for multiple reasons having to do with Valley politics: Twitter founder Jack Dorsey is also an investor in Instagram and the two companies share Benchmark as an investor. One could speculate that this is a competitive move on Twitter’s part, a direct attack on Facebook’s social graph via limiting access to its recent acquisition (Instagram).