The National Building Museum is not your average museum – and thanks to Martin Moeller, its home base often takes pride of place 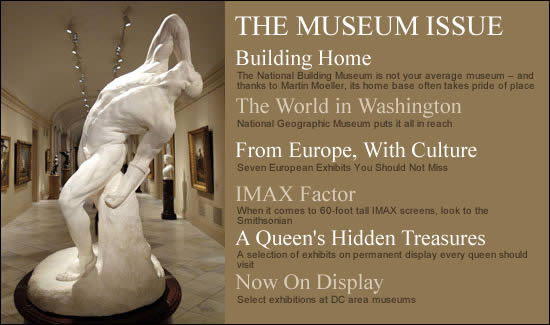 The dog days of summer just may be the best time to check out the many museums Washington has to offer. By this time of year, the tour groups flooding the federal core and vicinity since spring have generally ambled home. In their wake are the smaller pools of locals and the otherwise intrepid seeking to appreciate, maybe even luxuriate, in the hallowed halls of knowledge and wonder.

Or maybe just to play a round of putt-putt.

Putt-putt at a museum, you say?

”It was a shameless attempt to get people into the museum during the summer with something that was still related to our mission,” concedes G. Martin Moeller Jr. He’s referring to the National Building Museum’s temporary exhibition, simply titled ”Play Mini-Golf Inside the Museum.” The museum tapped some of the Washington region’s leading architects, landscapers and contractors to design the holes around building/construction-related themes in its mini-golf course. Since its July 4 opening, the exhibit has attracted 9,000 visitors, says Moeller, a senior vice president and curator at the museum.

The mini-golf course is a key component of the venue’s ”Summer at the Museum” series of whimsical programming, which also includes its LEGO Architecture exhibit, launched two summers ago. LEGO-certified professional Adam Reed Tucker used the plastic toy building blocks to create replicas of some of the world’s most famous structures, such as the Empire State Building and the Gateway Arch, and visitors are invited to construct additions to a LEGO city.

Running through Labor Day, ”Summer at the Museum” also includes free concerts, co-sponsored by the Washington Performing Arts Society, of area youth ensembles Sunday afternoons in August. There are also ”special summer tours” of the building and special exhibitions.

If you haven’t figured it out by now, the National Building Museum is not your average Washington gallery in a grand space.

In fact, when people think of the Building Museum, they generally think of its colonnaded central foyer, known as the Great Hall, rising eight stories high and covering about 30,000 square feet. Though many other museums have large spaces that can be rented out for special events, few can match the grand size and scale of the Great Hall. In addition to the museum’s own lectures and events, the venue regularly opens its doors to presidential inaugural balls, the popular televised Christmas in Washington holiday concert, and galas such as the Servicemembers Legal Defense Network’s annual dinner.

Most recently, various donors sponsored the Great Hall’s display of AIDS Memorial Quilt panels in conjunction with the XIX International AIDS Conference. The focus was on those lost to AIDS from the design and building industries. ”Sadly there was no lack of such panels,” sighs Moeller, who earned his architectural degree from Tulane University almost 30 years ago – just as the disease started ravaging his field and so many other creative industries.

”We rely heavily on renting out the Great Hall. It’s a significant chunk of our budget,” Moeller says. He’s quick to add that the museum is a private, nonprofit entity. Contrary to popular perception, it’s not part of the Smithsonian Institution, nor is it federally run. Government funding? ”Not any to speak of,” responds Moeller. The government merely owns the building, which was originally constructed to house the Pension Bureau serving veterans and their families after the Civil War.

But aside from quirky exhibits and the various Great Hall activities – as well as far more serious, academically minded endeavors – the National Building Museum has also been building, however inadvertently, another distinction for itself, particularly over the past decade – that of serving as D.C.’s de facto city museum. (The Historical Society of Washington, D.C., shuttered seven years ago the short-lived official City Museum of Washington, D.C., housed in the Carnegie Library.)

From its longstanding exhibit ”Washington: Symbol and City,” which touches on the capital city’s inherent identity crisis, to temporary exhibits exploring D.C.’s architectural past, such as ”Unbuilt Washington” earlier this year, the Building Museum has repeatedly given its home base pride of place. And Moeller is a key reason why.