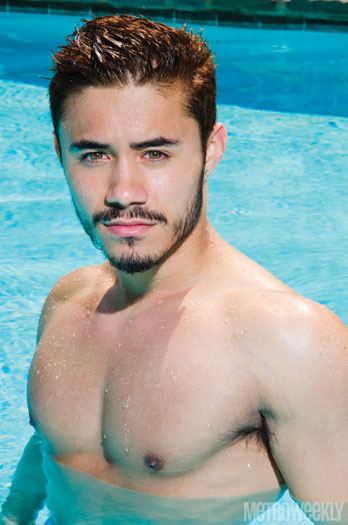 Pick three people, living or dead, who you think would make the most fascinating dinner guests imaginable.
Bruce Lee, Michael Jackson and Christian Bale as he was when he starred in American Psycho.

What would you serve?
Soul food.

How would you describe your dream guy?
Someone with a good sense of humor who can make me laugh. Someone who is open-minded and is always trying to better himself, and push himself and me. Someone who loves me unconditionally, through the good and the bad. And who is a bear.

Define good in bed.
Has patience and understanding toward my inexperience and lack of knowledge.

Who should star in a movie about your life?
A beefed-up version of Joseph Gordon-Levitt.

Who was your first celebrity crush?
Russell Crowe in Gladiator.

Who gets on your nerves?
Somebody who judges me before they even know me.

If your home was burning, what’s the first thing you’d grab while leaving?
My Chihuahua, Dexter.