When it comes to potential mates, Rich prefers the mature, the butch and the furry. A self-described lover of bears, the 23-year-old frequents Town’s DC Bëar Crüe Friday happy hours. The son of a Marine, Rich moved from place to place as a child, even living in Oman for two years. After initially moving to D.C. to live with a boyfriend, Rich has moved on to the city’s Petworth neighborhood. In his spare time, the ”movie nerd” loves to catch flicks on the silver screen, sample food at the District’s many restaurants and showcase his artistic talents by sketching or taking photos. If he’s not at Town, you can most likely catch him at Nellie’s or JR.’s.

What’s on your nightstand?
I don’t have a nightstand. 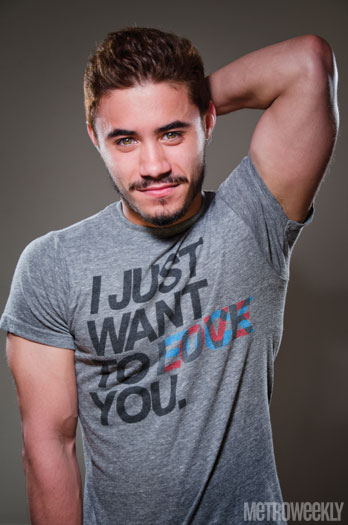 What’s in your dresser drawer?
My P90X book, workout sheets, a menu from a fast-food Chinese spot.

Where do you keep the condoms and lube?
On top of a cabinet inside my closet.

What are your television favorites?
True Blood, Dexter, Breaking Bad and Nurse Jackie.

What was your favorite cartoon when you were a kid?
Dragon Ball Z.

What superhero would you be?
Spider-Man.

Who’s your greatest influence?
My friends. After I recently got out of a longtime relationship, my friends have really been there for me and served as a shoulder to lean on.