Samsung took a very hands-on approach to its Unpacked IFA press event — literally, as all of its major announcements involved touch input of some variety. Phones, tablets, laptops, cameras, Samsung left few stones unturned as it gave indication of the numerous devices its bringing to market to tempt buyers for the remainder of this year. And what temptations they are, from the world’s first Windows Phone 8 device, to a bevy of Windows 8 tablets, and a new supersized Galaxy Note. Read on, and see if Samsung can tempt you, too…

Today’s event brought two major announcements, the first being the confirmation of a successor to last year’s surprise hit, the Galaxy Note “phablet”, and a relatively modest announcement of the world’s first Windows Phone 8 device.

The Galaxy Note II is Samsung’s new flagship. Forget the S3, this is the greatest phone in the Korean firm’s line-up. Last year’s Galaxy Note surprised many, with journalists lauding the screen, the processor, the battery life and the overall performance of the handset, but many snubbing it for it’s size. As it turns out, that size is exactly what caused it to outperform Samsung’s expectations, with the Note shifting 10 million units worldwide. The Note II, then, has some big shoes to fill. The Note II is to the S3 as the original Note was to the Galaxy S II. That is, similar, but with appreciable jumps in spec. The new Note increases its screen size from 5.3 to 5.5-inches, with Samsung’s HD Super AMOLED display outputting a 1280×720 resolution, signifying the change from 16:10 to 16:9. At just 9.4mm thick, the Note also includes a larger 3100mAh battery, which promises faster charging times. The increase in juice should also help power the 1.6GHz quad-core Exynos processor, a bump from the 1.4GHz model in the S3. There’s Samsung’s 8MP camera at the rear, and a 1.9MP front-facing affair for video calls and self-portraits.

Samsung has updated the S Pen, which now sports a thicker 8mm design to aid in comfort, as well as a rubberized tip — which the company claims will better recreate the sensation of writing with pen and paper. Pressure sensitivity has been increased to 1024 levels, and Samsung has increased the number of apps that can utilize the Pen, as well as included a notification that alerts the phone if the pen has been left behind. Better news for those fond of the freshest helpings of Android, the Note will come with Jelly Bean baked in when it launches later this year. Pricing is still a mystery, but it will be available in Titanium Grey and Marble White upon launch.

Samsung almost skimmed over the announcement in their press event, but today saw the launch of the world’s first Windows Phone 8 device, the ATIV S (pronounced ah-teev). The beautiful handset benefits from the hardware updates in Windows Phone 8, and sports the same 4.8-inch 1280×720 HD Super AMOLED display as the Galaxy S3. Power comes from a 1.5GHz dual-core Qualcomm CPU, and there’s an 8MP camera on the back, and a 1.9MP shooter on the front. Samsung has squeezed a 2300mAh battery into the phone’s slender frame, as well as 1GB RAM, a MicroSD slot, NFC capability, and 16 or 32GB of storage.

The handset itself marks a change in Samsung’s approach to smartphone design, eschewing the plastic construction of its Android-based Galaxy phones in favor of a brushed aluminum body, and the results are startlingly good. The front of the phone is encased in Corning’s second generation Gorilla Glass, and the whole device measures in at just 8.7mm. It’s a beautifully crafted handset that befits its premium status, certainly more so than the plastic Galaxy handsets which, while certainly flagship products, do little to support that image with rather cheap — albeit strong — construction. There were no pricing or availability details, but expect it to launch with Windows Phone 8 this fall.

(Thanks to Windows Phone Blog for the great shots of the ATIV S. Head over there — after you’ve finished reading, naturally — for more close-ups of the device.)

Samsung is getting into the Windows 8 swing of things, with tablet announcements coming thick and fast at this year’s IFA. The company brought three slates that showcased the updated OS. 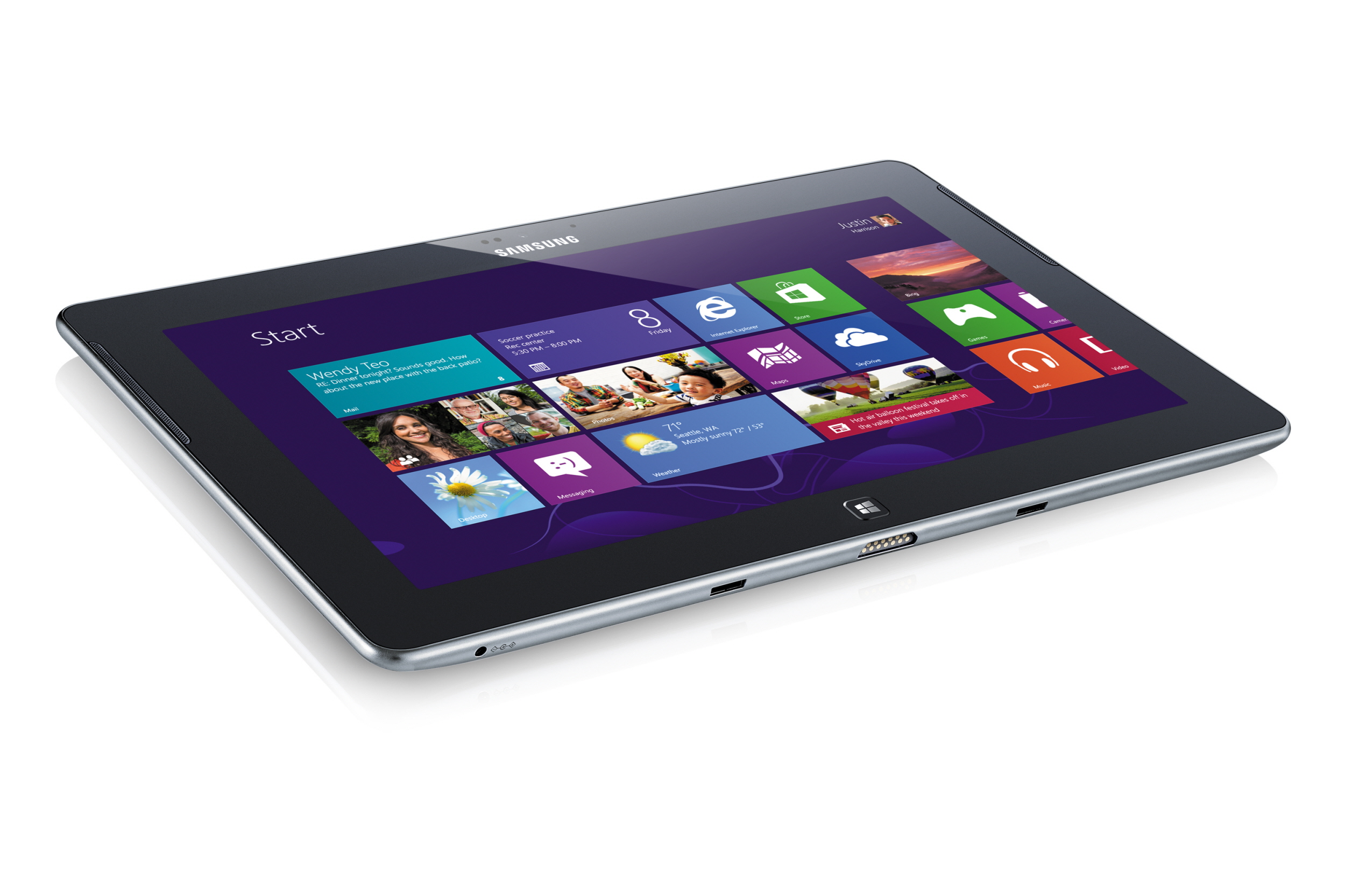 First, the ATIV Tab. This just-announced slate is one of the new ARM-powered Windows RT slates, which runs a custom version of the Windows 8 OS designed for the low-power SoC hardware. The ATIV Tab is a 10.1-inch mode, with the standard 1366×768 resolution that is proving popular in RT tablets. Inside, there’s a 1.5GHz, dual-core Qualcomm Snapdragon S4, which is helped along by 2GB of RAM, a 5MP rear camera, 1.9MP front-facing camera, and a generous 8200mAh battery to ensure you can browse live tiles all day long. Storage comes in 32 and 64GB flavors, and there’s micro-HDMI and a USB port on board. Weight is a reasonable 570g, and it’s a mere 8.9mm thick, complemented by its brushed aluminum back — which harks back to the original Android-based Galaxy Tab 10.1’s metal case. Samsung has remained tight-lipped on any launch details, but expect October 26 to be a safe bet for its release.

Samsung catered to those who prefer their tablets with full-fat Windows 8, with the new Series 5 and Series 7 tablets, which will be known as the ATIV Smart PC and ATIV Smart PC Pro (respectively) outside the US.

The more delectable of the two is the Series 7, an update to last year’s Series 7 Slate. It has the same 11.6-inch screen size as the Series 5, but with a Full HD 1920×1080 resolution. It’s also much more powerful, packing an Intel Core i5 processor, presumably of the Ivy Bridge variety, here paired with 4GB of RAM. Storage is a 128GB SSD, and the Series 7 should last for between 4 and 5 hours. The main difference in design is the 7’s 11.9mm girth, a necessity to accommodate the fans and vents required to keep the Core i5 inside in check.

Both slates feature a glass and brushed aluminum construction and come with Samsung’s S Pen digital stylus for accurate handwriting recognition, featuring 1024 levels of pressure sensitivity, as well as a suite of S Pen apps similar to those found in the Galaxy Note. Both will also come loaded with Samsung’s various media hubs for music, video and reading, as well as the company’s AllShare DLNA app for media streaming. Each has a micro-HDMI slot and USB port, with the latter being 2.0 on the Series 5 and USB 3.0 on the Series 7.

Available with the slates are optional keyboard docks, aping the functionality of the original ASUS Transformer, and furthering the working credentials that Samsung has for the 5 and 7. Sadly, the keyboard docks do away with the aluminum build in favor of lightweight plastic, but increase battery life of the Series 5 to 13.5 hours, and the Series 7 to 8 hours, as well as adding two extra USB ports to both.

Think Android, and you’re unlikely to think of a dedicated camera. Tablet, smartphone, even TV, but camera? Well, yes, actually. Today, Samsung announced the EK-GC100, or Galaxy Camera, an Android Jelly Bean camera with a huge 4.8-inch, HD Super Clear LCD display with a 1280×720 resolution, The screen dominates the back of the camera, while on the front, you’ll find a 16MP 1/2.33-inch BSI CMOS sensor. Samsung aren’t aiming the device at die-hard photographers, but its 21x optical zoom, f/2.8-5.9, 23-480mm lens should ensure that the resulting images are unlikely to disappoint.

It comes as part of Samsung’s SMART range of cameras, and features WiFi, 3G and 4G radios, microSD card access and a 1650mAh battery — although whether that will be enough to power the camera and the impressive screen through a days shooting remains to be seen (Samsung claims up to 7 hours is possible). A quad-core processor keeps Jelly Bean running at its best, and the camera has full access to the Google Play store, so users can download a myriad of camera and editing apps to compliment the included Photo Wizard and Movie Wizard solutions provided by Samsung. In between snaps, the camera should be more than adept at slinging Angry Birds or keeping you updated on Instagram updates. The Galaxy Camera launches this October, at both retail and carrier outlets, though pricing is as yet unannounced.