Upcoming nuptials on the horizon and a busy work schedule are prompting Mike Benardo, the Advisory Neighborhood Commissioner for ANC 2F06 in the eastern edge of the city’s Logan Circle neighborhood, to hang up his hat.

”I’m engaged and we’re looking for a place to buy,” says Benardo, chairman of his ANC. ”I’d love to stay in this neighborhood. I love it. But I’m not sure we’ll be able to find something. And I need to dedicate more time to my personal life.”

Serving since 2006, Benardo is one of more than 200 elected commissioners throughout the city, unpaid public servants. ANCs typically offer recommendations for policies and programs affecting their neighborhoods related to traffic, parking, street improvements, crime and zoning restrictions. 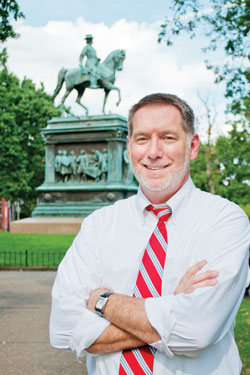 ”My experience has been very positive,” Benardo says. ”The reason I got involved with the ANC to begin with was not so much that I have higher political aspirations. I don’t want to be mayor someday or anything like that. I just really cared about my neighborhood.”

Benardo, who’s lived in the Logan Circle area since 1998, says he’s witnessed firsthand the explosion of development in his ANC, particularly the area around 14th and P Streets NW. And unlike some of his fellow commissioners in other ANCs, who he knows have struggled against anti-gay sentiment in gentrifying areas, Benardo says his identity as a gay man hasn’t hurt his career as a commissioner.

In fact, Benardo says, Logan Circle’s ANC 2F is often jokingly called the ”GayNC” because the majority of its commissioners have been gay.

”It doesn’t influence our decisions,” he says. ”We’re all involved because we care about our neighborhood. Development happens whether you’re gay or straight.”

Benardo says the biggest accomplishment during his time on the ANC has been the ”arts overlay district,” which stretches from Thomas Circle up 14th Street NW, before hooking a right at U Street and ending around 9th Street.

Benardo says the point of the arts overlay district was to control the proliferation of restaurants and bars in the area and encourage the development of space that could be used for arts uses or that could allow potential space for small businesses to take root.

Noting there are a number of out LGBT candidates running for various ANC positions this year, Benardo says the best advice he can give aspiring ANC commissioners is to get out in their neighborhoods, knock on doors, introduce themselves to people and explain why they’re running.

”It’s important that they get out and talk to their neighbors so they know who they are and what they stand for,” he says.

Moreover, Benardo says, if they manage to get elected, the ability to listen and absorb new information is crucial to serving well.

For example, ANC 2F has its own Facebook page, and Benardo has his own Twitter handle, in addition to fielding phone calls from constituents.

But now, however, Benardo is more than willing to step aside and let some new blood get into the system. Then again, he hasn’t ruled out a political comeback.

”I kind of assume I will [run again], especially if I move to an area that’s more transitional than Logan,” Benardo says with a laugh. ”I mean, it’s just who I am. I always want to get involved in where I live and try to make it a better place.”

John Riley is the local news reporter for Metro Weekly. He can be reached at jriley@metroweekly.com
← Previous Story ANC Racers Hit the Trail
Next Story → Tea Party Push