A group of prominent African-American religious leaders from Maryland, as well as other parts of the country, endorsed Maryland’s Question 6 at a press conference at the National Press Club in Washington this morning. Question 6 is referendum to affirm the law passed earlier this year to allow same-sex couples access to Maryland marriage licenses.

Led by the Rev. Delman Coates, pastor of the 8,000-member Mt. Ennon Baptist Church in Clinton, Md., 11 ministers expressed their support for civil marriage equality, even if their particular churches oppose same-sex marriage. 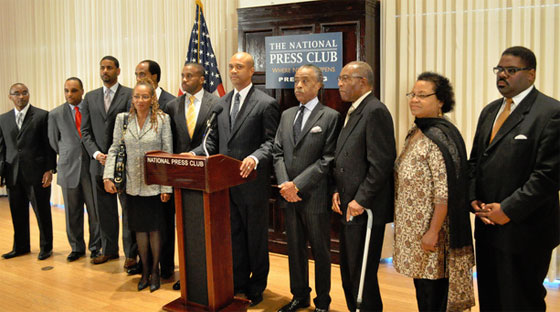 ”As pastors and clergy leaders, we are here today to declare our unequivocal support for Maryland’s Civil Marriage Protection Act and to dispel the myth that all African-American pastors are fundamentally opposed to the idea of marriage equality,” Coates told the audience at the Press Club, referring to the title of the marriage-equality bill signed into law by Gov. Martin O’Malley (D) in March. The law does not take effect until Jan. 1, 2013, a political concession made to help it pass the Maryland Legislature.

”Admittedly, many of us find the idea of voting on someone else’s civil rights a bit disconcerting,” Coates continued. ”When the rights of the minority are submitted to a vote, all too often the minority loses. But I am confident that over the course of our advocacy in Maryland this year, and the evolution of views nationally at the highest levels, we are seeing attitudes change, which causes us to be confident that Marylanders will allow fairness for all to be the guiding principle that informs their support for Question 6 on the November 6th ballot referendum.”

Coates emphasized that the debate over Question 6 needed to be a question of public policy, rather than a debate over religious beliefs. He also highlighted the fact that Question 6 and the underlying marriage-equality law explicitly provide religious protections for institutions and clergy who do not want to endorse or perform same-sex marriages.

Other speakers at this morning’s event were the Rev. S. Todd Yeary, senior pastor of Douglas Memorial Community Church in Baltimore; the Rev. Brad Braxton, senior pastor of The Open Church in Baltimore; and the Rev. Christine Wiley of D.C.’s Covenant Baptist United Church of Christ; and Susan Newman, associate minister of All Souls Church in Washington. Wiley and Newman, both Maryland residents, both said that many of their D.C. congregants are also Maryland residents and who will be supporting Question 6.

The Rev. Donte Hickman, senior pastor of Southern Baptist Church in Baltimore, who testified alongside Coates in favor of marriage equality before the Maryland General Assembly, also attended the press conference, though he did not address the crowd.

Aside from voicing their support for Question 6, the pastors also challenged attempts by others to use President Obama’s recently stated support for marriage equality as an argument to persuade religious African-Americans to not vote in November.

One of the marriage-equality movement’s most vocal opponents, the National Organization for Marriage (NOM), stated in a 2009 memo a goal to ”drive a wedge between gays and blacks … fanning the hostility in the wake of Prop 8,” referring to the California ballot measure that rescinded same-sex couples’ right to marry in 2008. Responding to a press question, the Rev. Amos Brown, senior pastor of San Francisco’s Third Baptist Church, specifically called out NOM its tactics.

John Riley is the local news reporter for Metro Weekly. He can be reached at jriley@metroweekly.com
← Previous Story Rose to the Occasion
Next Story → Gov. O'Malley Makes Pitch for Marriage Money