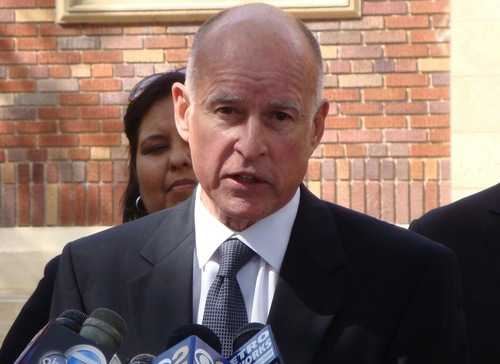 California became the first state in the nation to officially outlaw gay “conversion” and “reparative” therapy for minors after Gov. Jerry Brown (D) signed the historic legislation into law on Saturday.

The San Francisco Chronicle reported late Saturday that Brown signed the bill into law, which prohibits children younger than 18 from undergoing “sexual orientation change efforts” at the hands of licensed therapists seeking to “cure” them of homosexuality.

“This bill bans non-scientific ‘therapies’ that have driven young people to depression and suicide. These practices have no basis in science or medicine and they will now be relegated to the dustbin of quackery,” Brown said in a statement, according to The San Francisco Chronicle.

Therapists who do practice therapy that attempts to turn gay youth straight can now lose their licenses under the state’s ban, which takes effect Jan. 1, 2013. Although the new law bans licensed therapists from administering ex-gay therapy, it does not affect religious groups or ministers.

Nevertheless, supporters of the ban immediately lauded the move by Brown, calling it a landmark victory for the broader LGBT-rights movement.

“LGBT youth will now be protected from a practice that has not only been debunked as junk science, but has been proven to have drastically negative effects on their well-being,” said Griffin, adding that HRC will continue to fight against “this kind of child abuse” in other states.

Earlier this week, more than 48,000 people signed an HRC petition urging Brown to sign the bill. In late August, Griffin also sent a letter to Brown encouraging him to sign the bill in order to “safeguard the most vulnerable among us.”

Another key player behind the bill was the National Center for Lesbian Rights, which co-sponsored the bill authored by state Sen. Ted Lieu (D).

In a statement, NCLR Executive Director Kate Kendell said Brown had sent a “powerful message of affirmation and support to LGBT youth and their families.”

“This law will ensure that state-licensed therapists can no longer abuse their power to harm LGBT youth and propagate the dangerous and deadly lie that sexual orientation is an illness or disorder that can be ‘cured,'” Kendell added.

The bill had been awaiting Brown’s signature for about a month after the State Assembly, which is controlled by Democrats, approved the legislation 52-22 on Aug. 28. The State Senate concurred with the lower chamber’s version of the bill, voting 22-12 along party lines to send the bill to Brown’s desk for final approval.

While Republicans argued that conversion therapy should be something decided by medical boards and raised concerns that the bill infringes on the rights of parents to choose what is in the best interests of their children, opponents said conversion therapy amounted to abuse.

Opponents also argued that the bill would erect barriers for gay youth seeking treatment that the state has now deemed harmful and dangerous.

In an email sent to the Los Angels Times after the bill’s passage, Christopher Rosik, a therapist for the dubious National Association for Research and Therapy of Homosexuality (NARTH), said there was no scientific basis for the ban.

“As is plainly evident, should SB 1172 become law, licensed therapists in California who would otherwise be willing to assist minor clients in modifying their unwanted same-sex attractions and behaviors will be seriously jeopardizing their professional livelihoods,” Rosik wrote.

The ban comes four months after 80-year-old psychiatrist Dr. Robert Spitzer retracted a controversial 2001 study that stated gay people who are sufficiently motivated can change their sexual orientation. The study had been cited by many who practice “conversion therapy” as proof that being gay is a choice that can be overcome. After his retraction, Spitzer also issued an apology to his former patients and the LGBT community.