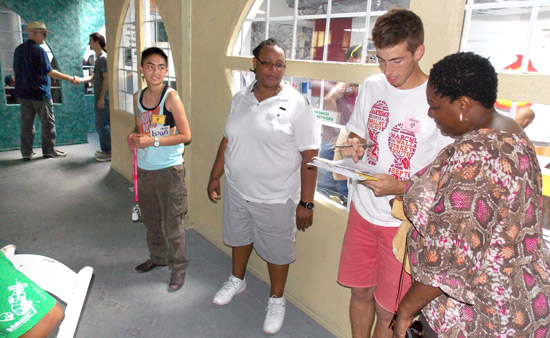 CHARLOTTE, N.C. – Thousands of Democratic National Convention delegates and guests will celebrate the renomination of President Barack Obama this week as thousands more people show up to protest the national political convention. Among them are conservative religious activists protesting abortion clinics and others declaring a ”national spiritual emergency.” But LGBT activists are on the ground, too, highlighting pro-equality issues and other topics of interest especially to young people.

Matt Hickson, a University of North Carolina-Chapel Hill student and an organizer with Festival Liberación and the March on Wall Street South, says neither political party is addressing issues most important to people today.

”Political discourse today is not speaking to the needs of regular people,” says Hickson, who identifies as gay. ”Every time you turn on the TV you get an ad for one of the major political parties and their candidates. Almost all of those ads don’t speak to the fact that North Carolina is a state where workers are highly oppressed, where public sector workers are not allowed to collectively bargain, that North Carolina just passed [the anti-LGBT state constitutional] Amendment One or that education has been cut by almost a half a billion dollars.”

Hickson says he and his co-organizers want to use the DNC’s presence in Charlotte to bring attention to issues important both locally and nationally. The influence of corporate cash on politics today is one of his biggest concerns.

”We see that the root of the problem with the two major political parties is the amount of money they take from big corporations and banks and the interests they are beholden to because of that,” he says. ”It’s not surprising that they chose to have the DNC in Charlotte, being that the headquarters of Bank of America and Wells Fargo are here and Duke Energy is here. Duke Energy’s CEO is serving as the fundraising chair of the DNC.”

Hickson says Charlotte is a ”perfect storm” for Democrats, being the largest city in a swing state and being ”the one Southern city with a huge concentration of financial capital.”

Other issues like the status of undocumented students and other immigrants as well as homelessness are also important, even to LGBT people.

Hickson’s group held a special day of organizing with workshops and other activities Saturday, Sept. 1. On Sunday, they joined hundreds for the March on Wall Street South. He says he and his friends will stay the entire week of the convention and hope to leave a progressive legacy.

”Charlotte does not have a history of real good organization on the ground, the kind of organizing that doesn’t just organize actions like the march but also the kind that organizes workers, for example, to picket in front of City Hall for a raise,” Hickson says. ”We want that kind of organizing to continue in Charlotte and this has been a great way to bring all these groups together.”

Citizens and residents, Hickson says, already have the tools to organize.

”The hope is that this will spark a lot more energizing in Charlotte and in North Carolina because we need it here – we need labor organizing and organizing for queer rights and for undocumented people,” he says.