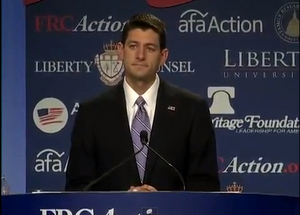 Echoing his stump speech from the campaign trail, Republican vice presidential candidate Paul Ryan spoke at length about the economy and fiscal issues, largely shying away from the controversial social issues the Values Voter Summit, organized by the Family Research Council, has become known for.

Although Ryan did not mention his opposition to marriage equality, the Wisconsin congressmen did note Mitt Romney’s opposition in an apparent attempt to sell Romney’s candidacy to social conservatives.

“We can be confident in the rightness of our cause, and also in the integrity and readiness of the man who leads it,” Ryan said in reference to Romney. “He is a solid and trustworthy, faithful and honorable man. Not only a defender of marriage, he offers an example of marriage at its best. Not only a fine businessman, he’s a fine man, worthy of leading our country and ready to lead the great turnaround we have spent four years waiting for.”

Social conservatives have been hesitant to warm to Romney, who once said he would be better on gay rights than Ted Kennedy, despite the fact that he now supports a constitutional amendment banning same-sex marriage and is opposed to civil unions that offer same-sex couples the same rights as marriage.

Ryan gave the crowd his best pitch for a Romney presidency, describing the man who plucked the 42-year-old Ryan from Congress for the VP slot as a “modest man with a charitable heart.”

Although Ryan did not speak at length about LGBT issues, he did double down on his criticism of the Obama administration’s support for Israel and abortion rights.

Ryan said Obama’s claim that “we’re all in this together” sounds “hollow” coming from “a politician who has never once lifted a hand to defend the most helpless and innocent of all human beings, the child waiting to be born.” Ryan also accused the Obama administration of treating Israel with “indifference bordering on contempt.” Both lines received thunderous applause from the audience. 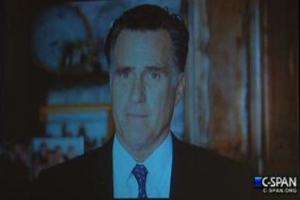 While Romney did not attend the conference because of commitments on the campaign trail, he did deliver a video statement.

Romney told the conference that America needs a president who respects “traditional values” and said he would “defend marriage, not try to redefine it.” He also vowed to protect American culture.

Cantor declared his support for “traditional marriage,” stating that social conservatives oppose marriage equality because “the way for us to allow the pursuit of happiness is through individual effort.”

“That is why we believe in traditional marriage, because marriage, more than any government program ever has or ever will, has lifted up people out of poverty, even those who felt there was no hope,” Cantor said. “Marriage has proven to be that formula which has been more successful at allowing for that pursuit of happiness.”

LGBT organizations were quick to pounce on Ryan’s appearance at the Values Voter Summit.

In a statement released before Ryan even took the stage, Michael Keegan, president of People For the American Way, released a statement declaring Ryan’s appearance a “stamp of approval to bigotry.”

“By speaking at the Values Voter Summit, Paul Ryan sends a clear message: a Romney-Ryan administration has decided to embrace the entrenched bigotry advocated by the farthest of the far right,” Keegan stated.

Keegan called out previous claims by the FRC and the American Family Association, a cosponsor of the summit: “The FRC frequently and falsely links homosexuality to pedophilia. The AFA has claimed that gay men were responsible for the Holocaust. Both have defended laws at home and abroad that criminalize homosexuality. These are not innocent differences of opinion; they are full-scale efforts to smear and denigrate LGBT Americans.”

In a separate statement, Family Equality Council, Log Cabin Republicans and the National Stonewall Democrats joined in calling on the FRC and summit attendees to stop hiding behind veiled anti-gay language like the term “traditional family values.”

“I say enough. It’s time for fair-minded Americans to reclaim the term family values and use it in a way that unites our country instead of dividing it,” said Family Equality Council executive director Jennifer Chrisler. “We can disagree on some things, but we must agree to respect all American families.”