Rose to the Occasion

Hearing the call to help humanity, Matthew Rose answered it

The National Association of People With AIDS (NAPWA) founded the National Gay Men’s HIV/AIDS Awareness Day (NGMHAAD) ­– Thursday, Sept. 27 – to ”help gay men remember how much we have accomplished together in the fight against HIV/AIDS, remember the quarter-million lovers and brothers we have lost, and renew our commitment to ending what is now an endable epidemic.”

When it comes to that commitment, Matthew Rose is certainly doing his part. At first glance, the 26-year-old Columbia Heights resident doesn’t seem so out of the ordinary. Talk to him just a little bit, and you immediately get the sense that Rose tends toward the wonky, that he’s comfortable crunching numbers or going off on a tech tangent. You might not glean immediately that he’s gay, though he is. There’s no evident accent to betray his suburban Seattle upbringing or his years at the University of Oregon. LGBT journalists might know him by name, in that Rose works as membership coordinator for the National Lesbian & Gay Journalists Association. A stranger might even recognize Rose as someone involved with the HIV Vaccine Trials Network (HVTN), a Seattle-based entity supported by the National Institute of Allergy and Infectious Diseases (NIAID), a collaboration of scientists and educators on the hunt for an HIV vaccine. 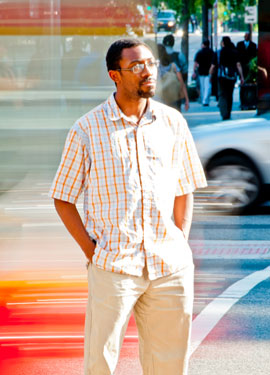 ”I’m kind of like the HVTN ‘fanboy’ in some ways,” Rose shares with smile. ”They’ve got a lot of promotional materials with my face, videos. I’m kind of one of their big community people.”

But just by looking at Rose, there’s no way to tell that he’s a participant in a current HIV-vaccine study, ”HVTN 505.” Of course, this being a double-blind study, not even Rose knows if he has the experimental concoction or the placebo flowing through his veins. Either way, that’s entirely beside the point.

What’s important, says Rose, is advancing the science, getting us closer to a safe and highly effective vaccine. The study is another step in that direction.

Launched in June 2009, this particular trial was designed to see if 505 could reduce viral loads. But after a trial in Thailand found in September 2009 that a similar approach was able to generate some protection – scant though it was – against acquiring HIV, 505 was expanded, both in scope and participation. Today, the 505 trial is ”the world’s largest ongoing HIV vaccine study,” and when fully enrolled will have 2,200 volunteers – ages 18 to 50, HIV-negative men and transgender women who have sex with men, who are circumcised.

The eligibility requirements alone – which also include not having any antibodies to a particular common-cold virus – will increase our knowledge, says Rose.

”The things we will learn are very important,” he emphasizes. ”We haven’t recruited gay, bisexual and other men who have sex with men in this country for a vaccine trial in a really long time – not since the VaxGen trial in the early 2000s. Ramping up to do that work again, we haven’t tried to really recruit the trans population in the trials before. So we’re leaning more things about how to recruit people and engage communities we haven’t historically engaged.”

As for 505’s efficacy, one might get the idea that Rose has no high hopes. This trial, he says matter of factly, will not produce a wonder drug.

”You can’t look for the knock-out punch,” he cautions. ”We just don’t know enough about HIV to do that. We need to return to the art of the jab. You’ve got to work the body, figure things out.”

And, slowly – almost surely, Rose reckons – HIV will be conquered. In the meantime, he’s gratified to be doing his part. While he says he’s not a heavy-handed recruiter, however, he’d be thrilled to see more people step forward for the sake of the science and the humanity, as long as they’re going in with eyes wide open.

”I’m not trying to sell people,” says Rose. ”I tell people my experience. I don’t want to sell you on the trial. I really want you to want to be in the trial – if it’s right for you at this stage of your life.

”People who enroll in trials do it from all walks of life, and everyone I’ve ever talked to who’s been a trial participant had an overriding sense of wanting to give. The volunteers really care. And the study teams really care about the volunteers. One of the misconceptions people have about science is that they’re just trying to get an answer, but they really care.”

For more information about volunteering in vaccine trials, visit hopetakesaction.org.