By John Riley on October 8, 2012 @JohnAndresRiley

Opponents of marriage equality have begun airing the first of what is expected to be many commercials opposing Question 6, the ballot referendum that would uphold the recently passed Civil Marriage Protection Act that legalized marriage equality in Maryland. 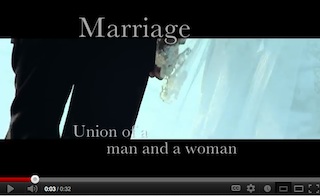 Starting this morning on Washington’s WUSA 9, the Maryland Marriage Alliance, the chief opposition to Question 6, aired an ad opposing the ballot measure. The ad, titled “Marriage is More,” features pictures of married heterosexual couples, babies and several families consisting of a mother, father and children as a woman’s voice reads the following message:

“Marriage, the union of a man and a woman, has served society well for thousands of years. Marriage is more than just what adults want for themselves. It’s also about the next generation. Marriage provides children the best chance of being raised by a mother and father. While death and divorce too often prevent it, children do best when raised by their married mom and dad. Everyone is entitled to love and respect, but nobody is entitled to redefine marriage. Vote against Question 6.”

Despite earlier financial troubles this summer, the Maryland Marriage Alliance – with help from the National Organization for Marriage (NOM) and other conservative groups – is expected to run ads across the state, particularly in the Baltimore media market and the relatively expensive Washington market, which may prove key to the referendum’s success or failure.

While all but one representative from Montgomery County voted for the Civil Marriage Protection Act when it passed the House and Senate in February, the Prince George’s delegation was more split on the matter, with a slim majority voting in favor of the act.

“We are certain our ads will help Marylanders understand the importance of preserving marriage in our state,” Derek McCoy, chairman of the Maryland Marriage Alliance, said in a press release announcing the ad. “Our ad highlights for voters the very fact that marriage is about more than just two adults doing what they want. Marriage is about the next generation and ensuring that all children are given the opportunity to be raised by their mother and father.”

A few hours after the ad aired Monday morning, the Marylanders for Marriage Equality coalition, the primary group supporting Question 6, sent a fundraising email citing the new ad, as well as touting its own.

“Our ads go up in Baltimore this Wednesday,” Kevin Nix, spokesman for Marylanders for Marriage Equality, said in the email. “But we don’t have the money to match them in the Washington market – where almost half the state’s voters get their TV – for two weeks. I don’t want to scare you, but it’s really that simple. We need money in the bank today to go toe to toe with our opposition.”

While some recent polling has shown marriage-equality supporters to have a substantial edge among registered voters, a poll by OpinionWorks on behalf of The Baltimore Sun found support for Question 6 among likely voters just below the 50 percent threshold usually indicative of success at the ballot box, at 49 percent. That compared to 39 percent of likely voters who would, in hope of repealing marriage equality, vote against Question 6.