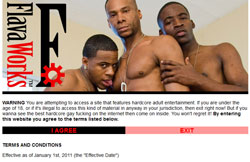 Flava Works, an adult video company that specializes in black gay male sex scenes, has been awarded $3 million dollars in two file sharing cases, according to Forbes. The company’s CEO, Phillip Bleicher said he was surprised by the hefty amount won because it was the maximum allowed.

Bleicher and Flava Works have reportedly sought damages from 15 of the company’s own members, each of whom paid for access to its websites. Apparently, some individuals download the copyrighted adult videos legally, but then they illegally shared the videos online via bit torrent site uploads. Bleicher told Forbes:

“We want to go all the way. We want them to understand you can’t just steal….When we catch a customer distributing our movies on file-sharing sites, we want to cut it off at the source”

One of the men, Kywan Fisher, has had the details of his case written about on multiple news and blog sites this past Friday. According to a court memorandum, posted by TorrentFreak.com, each of his video downloads contained a unique encrypted code which allowed Flava Works to track 10 videos shared from three different sites: FlavaMen.com, CocoBoyz.com and Thugboy.com. The damages sought were $150,000 for each file and an injunction to stop Fisher from further:

The mention of “embedding” is particularly interesting because, in August of 2012, Flava Works lost a separate lawsuit against MyVidster.com. A judge determined in that earlier case that MyVidster only allows users to save HTML/Javascript code that embeds videos on its site. The copyrighted material was not directly uploaded to MyVidster’s site even though it could be viewed inside a window on MyVidster’s pages.