With almost as much silence as speech, playwright Annie Baker seems to be daring theatergoers to snooze during ''The Aliens''

A theatergoer just might get lost daydreaming during The Aliens, plotting an escape out of the Studio Theatre’s intimate, second-floor Milton Theatre.

That is, of course, if he or she hasn’t actually dozed off to sleep. 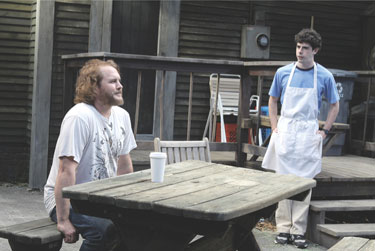 The thoughts of escape are provoked by the character KJ, who drones the word ”ladder” over and over again. All told, he probably chants the word 100 times – I lost count after 60 rounds – chewing up several minutes of time. Several long minutes. Why? It’s KJ’s way of calming himself down and falling sleeping after a panic attack. Is playwright Annie Baker daring the audience here? Seems like it to me.

Ultimately, that’s only the most awkward period in The Aliens, a play that is mostly quiet – and thoroughly disquiet, with a title inspired by the poet Charles Bukowski. Baker has proscribed that more than a third of the play’s roughly two-hour run time consist of nothing but silence. We’re talking 40 minutes or more when nothing is heard but scattered rumblings, mostly from folks in the audience. The play, which focuses on the heartbreaking awkwardness and loneliness of modern life and relationships, actually opens with several long minutes of utter silence. As the lights come up, we see the characters KJ (Scot McKenzie) and Jasper (Peter O’Connor) flanking a picnic table in the employees-only area behind a Vermont coffee shop, where all of the play’s action takes place. Both stare out into space until eventually – but too little, too late – KJ breaks the silence by singing, a cappella, some philosophical gibberish that he wrote.

From sung gibberish to the incessant repetition of a single word to all the in-between hush-hush: Staging The Aliens is a great challenge for everyone involved, from the actors, who must rein in their natural tendencies to do anything – you know, to act; to the set designer Daniel Conway, tasked with giving the audience’s eyes something to linger over while their ears rest; to sound man Stowe Nelson, who wakes everyone up with folk-rock interludes between scenes. Not to mention the sound of a distant July Fourth fireworks display.

That the cast and crew – as led by director Lila Neugebauer – all meet their various challenges doesn’t mean the audience, challenged simply to stay awake and engaged, has it easy. Several patrons, including one couple in the front row, were seen snoozing at various moments during a recent performance. Certainly, some people can and do snooze anywhere, no matter how much action does or doesn’t happen right in front of them. The point is, The Aliens is not nearly as entertaining as it frankly should be. Most people aren’t drawn to the theater to spend good money on a couple hours meditating over quiet action and silence. Isn’t that what yoga is for?