Brigadoon – the story of the magical Scottish village that appears out of thin air every hundred years – comes to mind.

Or maybe it’s more like young Clark Kent tossing his crystal at the North Pole only to have it instantly erupt into a Fortress of Solitude. 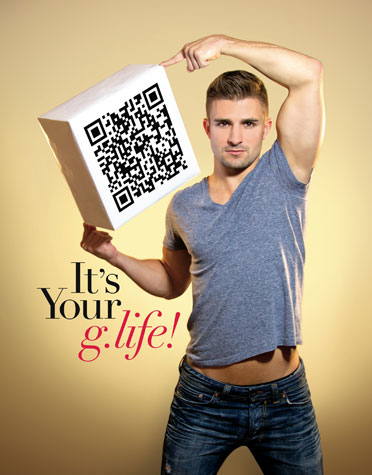 But what the heck is it?

Like Superman’s Arctic getaway, g.life will be cozy no matter the weather outside. Like Brigadoon, g.life is also a sort of village destined to appear and disappear on schedule. The similarities more or less end there.

”The tagline is, ‘One day in D.C., all things LGBT,’ with a focus on commerce,’ explains Santalla, president of the Capital Area Gay and Lesbian Chamber of Commerce (CAGLCC), aka the Chamber.

”We want to make this exciting,” Santalla continues, explaining the g.life concept. ”We’re encouraging people to come out of their booths. We don’t want to box people in. We’re breaking down the walls. That’s why we’ve laid g.life out as a city. We want to bring everything that happens in the city to g.life. It’s all there. It’s a sampling. People get to experience a snapshot of life. We’re not having a central stage – we’re having street performers. And we’re also using the ‘pop-up’ retail concept: here today, gone tomorrow.”

”We’re calling it a ‘pop-up metropolis,”’ Guenther says with gusto. ”We’ll have 3-D signs that look like Metro signs.”

Rather than ”Meeting Space 6,” ”Vendor Section Home & Garden” or similar, the Chamber has let loose its creativity to design a plan of streets and parks and a Santalla-signture ”lounge.”

”It’s not just an expo,” Guenther promises. ”We don’t want people thinking it’s the ‘Chantilly Home Show.’ … It helps to have a president who’s an interior designer.”

Santalla, founder of Studio Santalla, is, more specifically, an architect whose firm offers architectural, interior design and graphic design services. And the Chamber is making the most of those services with g.life. Santalla, meanwhile, insists that participating vendors get in the spirit of things.

”My studio is leading the effort on visual branding of the event,” says Santalla, whose talents will be most evident at the ”lounge” he is creating with with CareFirst and Contemporaria furniture retailer. ”We’ve told vendors, ‘We don’t want you to have a lemonade stand.’ … We’re saying, ‘Create an interesting display. Be creative.’ And we’ve helped a lot of vendors to that effect.”

As for the lounge specifically, he adds, ”It’s exciting. It’s beautiful. We’re using a floor and two walls to define the space. It’s modern. It features fine Italian furnishings. We’ve made all of our selections.

For the Chamber, however, getting to terrific has taken a learning curve, says Guenther, explaining that g.life is the evolution of event that began a few years ago as the LGBT Economic Development Summit. Back then, the Chamber wasn’t even the Chamber – it was PEN, the Potomac Executive Network.

”The first couple years were awesome, but it petered out,” says Guenther. Next came ”Connections!2010,” which Guenther describes as ”not well executed.” Something might have followed in 2011, but some jobs are too important to rush.

”We started planning as soon as Connections was over,” he says. ”We put a lot of planning in last year, but we didn’t find a venue we felt comfortable with, so we held it. This is the best time of year – right after the NGLCC dinner – so we just waited. We’ve been planning a long time, but the last few months have been nonstop.”

The NGLCC, the organization crucial to the Chamber’s timing, is the National Gay and Lesbian Chamber of Commerce, whose annual dinner brings a variety of business leaders and representatives of other LGBT chambers of commerce to the nation’s capital. It’s bound to be a pleasant reunion this year, particularly in that the NGLCC named CAGLCC ”Chamber of the Year” three months ago at its 9th Annual National Business & Leadership Conference in Chicago. And that dinner, Nov. 16, the night before g.life, should put CAGLCC’s new event in front of the perfect audience – one that may lead to similar events popping up elsewhere.

”When we were in Chicago in August and talked about this event, no one came forward to say that anything like this has been done before,” recalls Santalla. ”You come up with something good, and other people adopt it. That’s perfectly legitimate. … All the chambers, which are very much in contact throughout the year, we’re always learning from each other. We’d be more than happy to help people with everything that we’re leaning, everything we will learn.”

Chambers aside, Sean Bugg, co-publisher of Metro Weekly and vice president of the Chamber, emphasizes that – while it’s not the Chantilly Home Show, as Guenther points out – g.life is not being designed specifically as some type of business-to-business conclave, either.

”The message we’re trying to get across to people is that we want them to come and relax, enjoy themselves and be entertained, while also finding out information about local businesses, services and other things that may have relevance to their lives,” Bugg says.

”Trade shows are about having a number of booths and people trying to sell you a particular product that is right there, right then,” he says. ”That’s pretty much all there is to it. You’re there to get free swag, or something like that. You’re in and out in a couple of hours.

”This is really about creating a space for the community to all come together for one day to connect with LGBT and LGBT-friendly business, but also provide a lot of other things, in terms of entertainment, in terms of a really cool and different atmosphere for people to enjoy themselves.”

It’s guaranteed that for those who’ve never experienced a Chamber event, this will be something new. It’s a chance to peruse the breadth of LGBT Washington, perhaps grab a drink and lounge Santalla style, or take in a demonstration from Cocova, the exemplary chocolatier and presenting sponsor. Walk the ”streets” of g.life, take a class at ”g.life university,” or just enjoy the ”street performers.”

Even for those who have gone to every Chamber ”Mega-Networking Event,” to the annual dinners and frequent breakfasts, Santalla promises that g.life is going to deliver something they’ve not seen before.

”By far, it’s the most ambitious project we’ve ever undertaken,” he says. ”It’s very exciting. This represents a lot of what we’ve learned in the past umpteen years, and just a lot of creativity. It’s a very ambitious undertaking for an organization that has one full-time staff and the rest is all volunteers. We’ve put a huge network in motion to make this happen.

”We’ve had other events in the past, and we move on. But we see g.life become bigger and bigger each year.”