A 23-year-old woman named Mallory Owens was assaulted this past Thanksgiving at her girlfriend’s house in Alabama. The attack was carried out by Travis Hawkins, Jr., the 18-year-old brother of Owens’ girlfriend, Ally Hawkins. Owens’ mother, Kristi Taylor, told WKRG that Hawkins “tried to kill her.” WKRG and another station, WALA, reported that Owens’ family members believed the attack had been motivated by hate over Mallory’s sexual orientation. 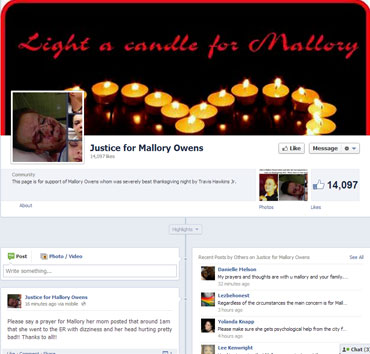 Graphic photos of Owens’ bloodied face and a harrowing description of her injuries circulated around the internet earlier this week. Thousands of concerned people responded with shock and outrage.

Many called for the signing of a petition seeking justice against Travis, Jr., including GLAAD. Support pages were created on Facebook. Bloggers wrote about the attack. HRC called for a swift investigation. In return, police stated that Alabama’s hate crime law did not cover crimes agaisnt lesbian and gay people, but added that the facts of the case were still being pursued.

The Hawkins family and their lawyer denied that the assault was a hate crime:

“They spent the day (together), had a nice Thanksgiving Day. At the end of the day and with no warning, Travis Jr. attacked Mallory.”

Mallory Owens recovered quickly enough to leave the hospital. On Tuesday, she indicated that her girlfriend’s family was correct — that the attack occurred over issues unrelated to her being a lesbian. She told WKRG:

”A lot of things have happened between us, but it doesn’t make me hate her brother. I don’t hate her family at all, or anybody for that matter.”

Ally Hawkins would not go into detail, but she too denied that the incident was a hate crime. Owens left the hospital, then returned to stay with her girlfriend’s family at the same house where she was attacked. She told WALA:

“No, it was just a bad night. I honestly don’t think that is what he thought, ‘Hey, you’re gay so I am going to do this to you.'”

Owens was asked if she was scared to be back at the home, and she replied: “No. It’s the way that they are. They’re a normal — you know, good, outgoing family.”

A Google search of Mallory Owens and Travis Hawkins reveals what may be a history of mug shots and involvement with authorities. News reports included a January 2011 incident in which one Travis Hawkins, Sr. allegedly shot his then 17-year-old son in the chest during an argument. He may also have faced a separate, previous charge of “attempted murder,” according a quote from District Attorney General Ashley Rich.

Yesterday, a Facebook post, which appeared to be from Mallory’s mother, offered an apology and explanation for the contradictory stories. In part, it read:

“Mallory suffered head trauma, severe injuries, and memory loss just a few days ago. Mallory is a loving girl and I believe very devoted to maintaining her relationship with her girlfriend, Allie. While in the home and presence of the Hawkin’s family several interviews were granted and it is my belief that Mallory spoke out of love and concern for her partner. I believe that Travis Hawkins Jr’s rage against my daughter stemmed from Mallory being Allie’s first same sex relationship, so there for his anger towards her was for being gay. … I’m very sorry for anyone who has felt confused or hurt by her statements. I’m unaware of any donations being made to the account for Mallory’s benefit, but if any are received I will gladly see them returned if requested.”