By John Riley on November 6, 2012 @JohnAndresRiley

Montgomery County residents flowed steadily in and out of the voting precinct at Bethesda’s Walter Johnson High School this morning, with wait times running anywhere from 25 to 35 minutes, according to elections officials and those who said they had cast their ballots and had not experienced any problems. 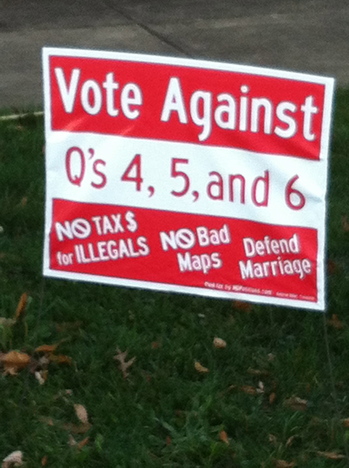 Several voters said they were excited about today’s election because the number of hotly contested ballot initiatives – including Question 6, which would allow gay and lesbian couples access to civil marriage licenses – gave people a chance to influence a close election in their reliably blue state, which is expected to vote for President Obama and congressional Democrats by wide margins.

“This is what democracy looks like!” Debbie Mazia, a union member, said exuberantly as she exited the polling place with a wide smile across her face. “I’m so excited. This is wonderful. And every vote counts.”

Mazia said the ballot, which was stacked with seven different statewide referendums as well as countywide ballot initiatives, wasn’t too cumbersome, though she did call it “the longest ballot I’ve seen.”

Asked about Question 6, Mazia said, “I’m for marriage equality. And I think it’ll do fine. I think everyone has a right to that, and I see it as a civil rights issue.”

Mazia said she also voted for casino gaming in Prince George’s County and for Maryland’s version of the DREAM Act, which would allow undocumented students who graduate from Maryland high schools and whose parents have paid taxes to receive in-state tuition rates at local institutions of higher learning.

Nicole Gabrielle Boucher Commodore, a recent transplant from Chicago, said she had to do a lot of research to prepare for the various ballot initiatives and local elections. Commodore said she voted against Question 7, to expand gambling at National Harbor, largely because friends of hers who live in that area didn’t want a casino in their neighborhood.

But even though Commodore said she saw a lot of advertising that linked Question 7 with Question 6, particularly from religious groups, she voted in favor of marriage equality. Commodore said she has friends and acquaintances who are LGBT, which helped influence her vote.

Marsha G., who asked that her last name not be used, told Metro Weekly that Question 6 was among one of her top priorities on the ballot, which she announced almost immediately after leaving the polling place.

“I’ve always thought that anyone who wants to marry whoever they want to, that’s so important,” she said, noting that she has an LGBT co-worker with a partner. “They’re in love, they care about each other. It’s about caring. And why shouldn’t they be allowed to do any of that? I mean, it’s crazy for people to say they don’t want that. Well, let them live their own lives!”

“I hope people are intelligent enough,” Marsha said when asked if Question 6 would pass in Montgomery County. “It comes down to intelligence. And if it’s going to pass anywhere, it should pass here.”

But Marsha also said that many of the referendums contained confusing wording, including Questions 4, 6 and 7.

“You read it and you don’t always know what they’re asking,” she said.

Naomi Blake, another voter, agreed that many of the ballot questions contained complicated or confusing wording. But she said that she had been aided in her decision by some literature that she had read prior to voting.

“I didn’t even know all of this was on the ballot – of course, Question 7 was the big one I saw everywhere, and heard on the radio and on TV,” she said, adding that she ended up voting for Question 7.

Blake said she did not vote on Question 6, but also didn’t understand why some opponents of Questions 6 and 7 had tried to link the two together.

“I believe anybody who wants to be with somebody should be, but just for religious reasons, I don’t want to vote for or against,” she said of her decision to abstain on 6. She also said she voted in favor of Question 4, the DREAM Act.

When asked what the most influential commercial she had seen or heard was, Blake said it was an ad with former Secretary of State Gen. Colin Powell talking about his endorsement of Obama, but also commented that she was surprised at how “late in the game” the ad was released. 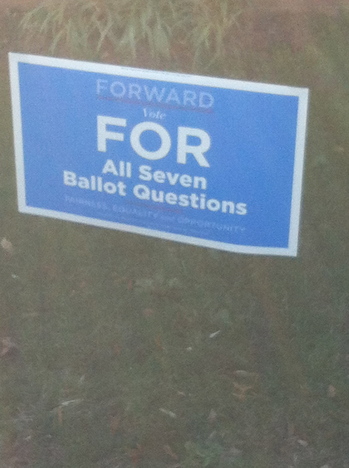 Jonathan Taylor, a high school law and government teacher, said he was out to vote because he felt it was his civic duty.

“The fact that there were so many important, controversial issues seemed to garner a lot of attention,” Taylor said. “I think the election this time around was much more interesting because of that.”

Taylor said one thing he was looking forward to was the end of all the political advertising. He declined to state how he voted, though he did say that he hoped Question 6 would pass in Maryland.

Opponents of 6 were also at the polls, with one woman who did not give her name – but said she was affiliated with the Maryland Marriage Alliance (MMA) – passing out fliers asking voters to vote against Question 6. Initially, as the first wave of voters arrived at the polls, several older people seemed to be in agreement with her, but a number of younger people refused to take her literature.

“Marriage protects families – all families,” said a younger woman who was escorting her underage son to the polls, where he was serving as a volunteer poll worker.

Another woman entering the polls with her husband also rejected the MMA flier, saying, “Oh, we can’t do that,” to the MMA woman’s plea to “Vote against Question 6.” But another man right behind the couple grabbed a MMA flier and said “Done,” bringing a smile to the MMA worker’s face.