Mike Burbach, editor for the Pioneer Press, responded to a wave of criticism his news site received over the weekend. He said that they “failed to deliver” on a promise to be impartial about Minnesota’s pending constitutional ban on same-sex marriages. He added, “we should have made our respect for the anti-amendment arguments more evident.” Burbach did not admit to using trivializing and alarmist wording, but he did say:

“The primary arguments against the amendment are clear and compelling: The Constitution is not the place for legislating marriage; and same-sex partners should have the same opportunity to profess their loving commitment, and gain the advantages of its recognition by the state, as heterosexual couples do, and for the same reasons.” 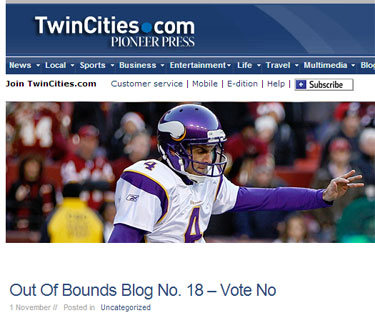 Chris Kluwe, a football player for the Minnesota Vikings, has been an outspoken advocate for same-sex marriages. One way Kluwe has been sharing his opinions has been as a writer for the Pioneer Press blog “Out of Bounds.” Today, he says he has quit his association with that Minnesota news site. He says he is disappointed that editors have published an editorial which displayed bias in favor of a constitutional ban against gay marriages. The matter will be decided by voters on Tuesday.

In a series of Tweets, Kluwe wrote:

“You can say you’re not taking a side one way or the other all you want, but if you print that in the editorial section you just took a side.

“Sent my email to the @PioneerPress informing them I will no longer contribute to their blog network. It will be my last post on the site.

“I will not be associated with any organization that tries to pull some bullshit like that. Have the strength of your convictions.”

Kluwe said he would be looking for a new blog to contribute to, and said his last “Out of Bounds” column will include the following points:

“My main issue with the Pioneer Press editorial is this: It’s a lie. I have no problem with them taking a position I disagree with. What concerns me is them presenting a completely biased piece (word choice, examples used, conclusions) as a neutral position. That’s not only irresponsible journalism, it’s massively hypocritical. Have the courage of your convictions. Attach your name to what you believe in. Don’t try to confuse people through obfuscation and selected presentation of arguments. It ruins discussion, and you should be ashamed.”

In that editorial, “The Minnesota marriage amendment,” the writer(s) claimed that “the Pioneer Press is not endorsing one way or another.” However, as Kluwe points out, there are a number points made, and examples used, that present same-sex marriage rights as being both a trivial matter and one to be feared by parents and religious organizations. The unsigned editorial says in part:

“[The] marriage amendment, should it pass, will not necessarily be permanent. It can be overturned by a vote of the people through the same amendment process currently under way….

“As it turns out, the debate isn’t exactly about equal rights and privileges…. This insistence on ‘marriage’ as opposed to rights and privileges seems to be about same-sex marriage being blessed by governmental endorsement…. Some argue that as a practical matter there seems to be less interest by same-sex partners in actually being married than in redefining what marriage is. In Iowa, for instance, Wikipedia reports, that only 815 same-sex couples married in the first year after legalization.

“Love may be love, but even now there are any number of prohibitions around marriage between consenting (heterosexual) adults. These prohibitions are intended to be in the interest of promoting the general welfare….

“[Supporters] of traditional marriage are not wrong to point out that religious groups who have refused to make their facilities available for same-sex couples have lost their state tax exemption and that religious groups have been forced to close their charitable adoption agencies as a result of having to choose between fulfilling their social mission and acquiescing to a new definition of marriage. And that whenever schools educate children about marriage they will have no choice but to teach it as a genderless institution. Indeed, some members of the movement are aggressive….”

The editorial then seems to imply that it was wrong to have “outed” financial backers of Proposition 8, to have protested Minnesota-based Target Corp. for donating to the campaign of an anti-gay politician, and for Chicago Mayor Rahm Emanuel to have voiced his displeasure with Chick-Fil-A‘s anti-gay political donations.

Instead, of being objective, the editors chose to repeatedly use the word “consequences” when imagining how marriage equality might affect Minnesotans. Throughout the editorial, the writer(s) present the purpose of the piece as being informative rather than influential. Chris Kluwe and many of the site’s commenters have sharply disagreed.