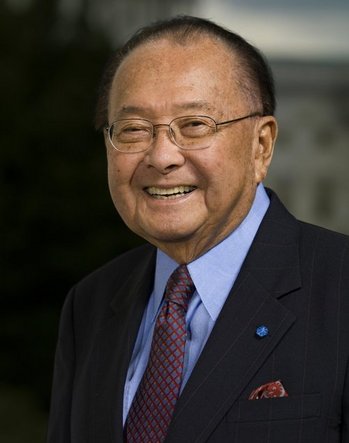 The nine-term senator’s death came after he was admitted to Walter Reed National Military Medical Center in early December for respiratory complications. According to his office, his last word was “Aloha.”

A World War II veteran who lost his right arm to a German hand grenade after being shot in the stomach while fighting in Italy, Inouye received the Medal of Honor. He became the first Japanese-American to serve in Congress when he was elected to the House of Representatives in 1959 after Hawaii achieved statehood.

Inouye was a supporter of LGBT-rights throughout his political career. In 1996, he was one of only 14 senators to vote against the Defense of Marriage Act. Later signed into law by President Bill Clinton, the federal law forbids federal recognition of same-sex marriage and is awaiting a ruling on its constitutionality by the Supreme Court. He supported the repeal of DOMA, voted against a constitutional amendment banning same-sex marriage and was a co-sponsor of the Employment Non-Discrimination Act. He also voted to expand hate-crime protections to LGBT Americans.

Inouye praised President Barack Obama’s support for marriage equality in May, stating, “How can we call ourselves the land of the free, if we do not permit people who love one another to get married? I look forward to working with the President to ensure his position on marriage equality becomes law in this country.” In a statement released Monday, Obama described Inouye as a “true American hero.”

As an Army veteran, Inouye supported the repeal of “Don’t Ask, Don’t Tell.” In Dec. 2010, responding to a Pentagon study calling for the repeal of the discriminatory ban on out gays and lesbians in the military, Inouye released a statement calling for an end to DADT.

“In every war we have had men and women of different sexual orientation who have stood in harm’s way and given their lives for their country. I fought alongside gay men during World War II, many of them were killed in combat,” he said. “Are we to suggest that because of their sexual orientation they are not heroes?”

“To his dying day, he fought for a new era of politics where all men and women are treated with equality,” Biden said.

“Few have done so much for so many as Senator Daniel Inouye,” said Human Rights Campaign President Chad Griffin in a statement. “Senator Inouye was a trailblazing leader and he will remain in our memories for standing with his LGBT sisters and brothers from day one. We will miss him, and every American should be grateful to have been touched by the life of this remarkable man.”

OutServe-SLDN Executive Director Allyson Robinson said Inouye will be remembered as an “advocate for fairness and equality, becoming a key supporter of the movement to repeal the discriminatory ‘Don’t Ask, Don’t Tell’ law when the chips were down and it mattered the most.”

Equality Hawaii Co-Chair Scott Larimer added his voice, stating that Inouye had “long been a beacon of hope for those who endured ridicule and retribution for being different.”

“His legacy of fairness and equality will endure the test of time,” added Jacce Mikulanec, Equality Hawaii Action Fund co-chair.

As president pro tempore of the Senate, Inouye was third in line for the presidency after the vice president and speaker of the House. Sen. Patrick Leahy (D-Vt.), now the longest-serving Democrat in the Senate, will assume the Senate leadership position vacated by Inouye. Hawaii Gov. Neil Abercrombie (D) will select a replacement for Inouye’s Senate seat, who will serve out the remainder of his term until the 2014 midterm election.