No doubt, you’ve heard the hype. Last month The Washington Post reported that Signature Theatre decided to stage Dreamgirls, purely and simply, as a showcase for its newest star, Nova Y. Payton. Payton, after all, provoked a Variety critic to swoon at her ”sensational” acting abilities in a production of the Tom Eyen and Henry Krieger musical in Philadelphia a couple years ago. 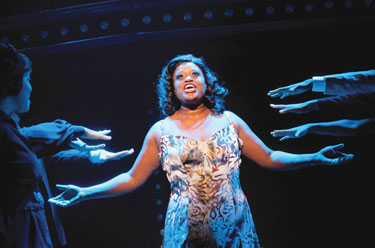 Why, even critics at Metro Weekly have been known to swoon over Payton, from Jonathan Padget – ”Payton may be reason enough to see this Hairspray” – to this critic, after taking in Best Little Whorehouse of Texas: ”Any show with Payton in it is worth seeing, full stop.”

And so it remains. As Dreamgirls‘ most-wronged character, Effie White, Payton carries the show and knocks you out every time she opens her mouth to sing, powering her naturally high-pitched, sweet and girly voice to become deeper and darker, full-grown and full-throttle. It’s an amazing transformation to witness in her Act 2 ballads, from the wistful ”I Am Changing” to the heartrending ”One Night Only.”

But of course, Act 2 of Dreamgirls has nothing on Act 1. Act 1 takes your breath away by virtue of its pacing. The familiar tale about the rise to fame of an R&B/pop girl group is told, in Eyen’s story and Krieger’s songs, with as much haste and efficiency as possible – until, that is, the dream of the Dreamettes becomes a nightmare. The book then slows down a tad to allow the shock of Effie’s demoralized state to sink in. The music gradually becomes less light and bright too, eventually plunging to the point of sad and utter devastation.

”(And I’m Telling You) I’m Not Going” certainly ranks as one of the most dramatic ballads ever written for the stage – or the screen. The person portraying Effie’s turn must be able to quickly and convincingly shift from being sweet and determined to bitter and desperate, and with as much vigor the audience becomes nearly as worked up about her predicament as she is. Payton does it all with seeming ease. She puts her own spin on the song and the role, away from the long shadows cast by the Jennifers: Hudson and especially Holliday.

But, thankfully, Signature didn’t just coast on its casting of Payton. The Arlington theater’s associate artistic director Matthew Gardiner has lined up pretty much a dream team for Dreamgirls. By show’s end, I couldn’t decide if I liked Shayla Simmons as Deena Jones or Crystal Joy as Lorrell Robinson better – both are top-notch, shining in their own ways and believable as pop stars. Cedric Neal is also exceptional, singing and shouting with gusto as the uncompromising, narcissistic soul man Jimmy Early. Sydney James Harcourt isn’t as power-piped as the other leads, but he’s got the right look – especially the eyes – and the charm to make you fall for his bad guy Curtis Taylor Jr. just as the Dreamettes do.

The story all transpires on Adam Koch’s long, multilevel stage with many moving parts, in front of Jon Kalbfleisch’s 10-piece rock band, unseen until the end. Among the smart creative team, costume designer Frank Labovitz gets biggest props for his increasingly sparkly, even noisy, costumes, and even more for the inventive way in which he gets the glamour duds on and off in mere seconds, occasionally even right onstage, aided by Chris Lee’s lighting trickery.

It doesn’t get much dreamier than this.