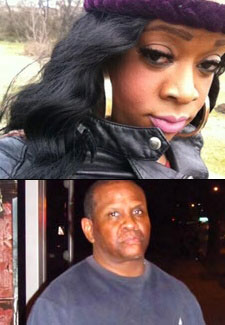 Deoni Jones (upper) will be remembered through a vigil with father Alvin Bethea (lower).

(Photo of Jones via GLAAD.org, Bethea by JD Uy/file photo.)

Montgomery, who in November pleaded not guilty after being indicted on a charge of first-degree murder while armed, remains held without bond as he awaits trial, scheduled for June 10.

According to charging documents, two witnesses passing by a bus stop at the intersection of Sycamore Road and East Capitol Street NE on Feb. 2, 2012, saw a man matching Montgomery’s description strike Jones in the head, after which Jones fell to the ground.

Jones was transported to Prince George’s County Hospital Center in Cheverly, Md., where she died of her injuries six hours later.

Alvin Bethea, Jones’s father, recently announced that friends and family of Jones will be holding a memorial vigil for Jones at the bus stop where she was killed, marking the one-year anniversary of her death. That vigil is scheduled for Feb. 2 at 7:30 p.m.