Barney Frank's decades-long House career has come to a close, but the gay firebrand is far from retiring

Barney Frank is office-less a few hours after the Jan. 3 swearing-in ceremony for the 113th Congress, having moved out of the large office he once occupied in the Rayburn House Office Building a few weeks earlier. The 73-year-old former congressman holds a folded newspaper under his arm and shuffles into a largely hidden room in the rotunda of the Cannon House Office Building. 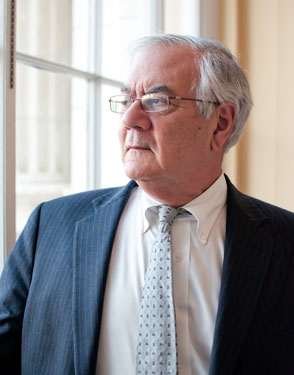 For the first time in 40 years, Barney Frank holds no public office. But talking about the future of the LGBT-rights movement and American politics he shows no signs of fading quietly. Although he says he’ll miss the drafting of legislation and passing of laws, Frank is looking forward to his own form of retirement, which, he says, will include public speaking and a couple books.

”I’m looking forward to working less hard and being under less pressure and having less tension,” Frank says. ”I’m just tired and my energy is gone,” he adds, attributing the four years of the financial crisis that he witnessed from his post on the House Financial Services Committee as contributing to his exhaustion.

Frank’s place in the history of the gay-rights movement is indisputable. The first member of Congress to voluntarily come out as gay, in 1987, Frank earned a reputation on Capitol Hill for his quick wit, understanding of financial affairs and ferocious liberalism. He was a champion of the Employment Non-Discrimination Act in the House, with his Massachusetts colleague Ted Kennedy leading the charge in the Senate.

As he notes, his political career has largely paralleled the gay-rights movement, having first been elected to public office a few years after the Stonewall Riots. Frank is in many ways a politician from a different era, and he leaves office at a time when momentum is truly on the side of equality.

With the largest number of out lawmakers to ever serve in Congress and the most LGBT-friendly president in American history set to be sworn in for a second term Jan. 21, Frank reflects on what’s been accomplished, and what’s still to come.

METRO WEEKLY: Are you glad to be done?

BARNEY FRANK: Yes. This is voluntary, my decision to leave. I’ve been back and forth. In 2010, I thought I wouldn’t run again. I thought I’d have one more term. I was too tired and doing full-time politics either for myself or for other political people since October of 1967. And I’m married and look forward to time with Jim.

And then when the Republicans took the House back I said, ”Well, if I leave now it’ll look like I’m being a sorehead that I wouldn’t stay as financial chairman.” And so I was going to do only one more term and then they changed the congressional districts and my problem was they changed the district I would be representing so drastically that I would’ve been going to 325,000 new people to ask them to vote for me as their member of Congress for one term. And I couldn’t do that. I think party responsibility is to work on people’s problems and issue and you can’t say, ”You know what, vote for me. But, by the way, if a problem arises 18 months from now I won’t be able to do much about it because I’ll be gone six months after that.” So it accelerated and then once that happened I’ve been very happy. I’ve been looking forward to doing other things.

And on the positive side, I want to write. I have a great respect for the written word. Some people can write while they’re doing other things. Former Sen. [Daniel Patrick] Moynihan could do that — a great senator and great author. I can’t do that. So I now will have a major opportunity to write a couple of books. I’m looking forward to that.

FRANK: First book is about what liberalism should be. Basically, I believe we should acknowledge that of the two parties we are the ones that understand the positive role that government can play in our lives. And we need to figure out how to get people to understand that better.

The second thing will be a history of the political activity around here. Accidentally, my political career and the gay-rights movement are exactly the same age. I got elected to the state Legislature in 1972 — three years after Stonewall. I rode in, as a candidate, the second gay-pride parade in Boston history in 1972. I filed the first gay-rights legislation in Massachusetts in 1972 and Massachusetts was probably the fourth or fifth state to do that. And I got here in 1981 and I have been on the floor as a member of the House for every debate and vote on LGBT rights ever, so I want to write about that.