In a resolution adopted Jan. 12 by the board of directors of GOProud, the group of gay conservatives formally endorsed same-sex marriage, according to a statement released today. 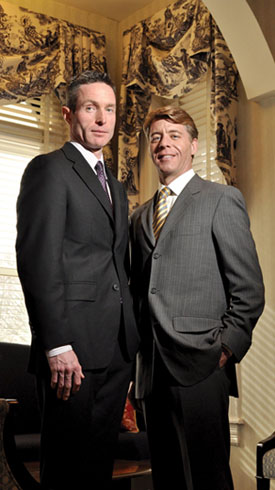 “GOProud believes that stable, loving, committed relationships are the cornerstone of our society and should be protected and encouraged for all couples – including gay and lesbian couples,” the group announced in a statement released this morning.

We believe that the decision about how to best do this is one that should be made at the state level and that these decisions are best made by the people directly or through their elected representatives – not by unelected judges.

We are firmly committed to winning hearts and minds, which is why we understand that not everyone who doesn’t support marriage for gay couples is automatically a bigot or homophobe.  We understand that there are people of deep faith who may have religious objections to marriage.  We respect those differences and believe that no church or religious institution should ever be force to solemnize a marriage that is against its teachings.

The decision to put the organization’s support behind same-sex marriage efforts comes nearly four years after the group’s founding as a group for gay conservatives focused exclusively on federal issues. Since its founding, GOProud has focused on the conservative agenda rather than social issues and has pegged itself as a more conservative alternative to Log Cabin Republicans.

With GOProud’s growth, its leaders have now sought to begin work on the state and local level. According to GOProud Executive Director Jimmy LaSalvia, this shift in focus is what led the group to put its support behind same-sex marriage campaigns.

“This decision came about as a result of our growth,” LaSalvia told Metro Weekly. “We have this demand from folks across the country to build state and local chapters and that made it necessary to state what our principles are when it comes to marriage, since that is an issue decided at the local level.”

Although GOProud has always opposed the 1996 Defense of Marriage Act, which forbids federal recognition of same-sex marriage, as an overreach of federal power, it has refrained from weighing in on state marriage-equality campaigns. But now, with local chapters expected in states such as Pennsylvania and Georgia, LaSalvia says the group will shift its focus based on the dynamics of particular states.

GOProud’s decision to support civil union efforts diverges from other organizations that have campaigned for same-sex marriage. Many LGBT rights organizations have argued civil unions are separate and unequal.

LaSalvia, however, says GOProud will approach the issue on a state-by-state basis.

“Any given state will determine what’s best for them. We laid out principals and we support same-sex marriage, but even when states do legalize same-sex marriage they’re going to come at it in different ways,” said LaSalvia. “Marriage laws for straight people differ from state to state. That’s for the people in that state to determine.”

As the group works to organize its supporters into a new database, LaSalvia says GOProud’s expansion to the state and local level is a challenge they’re ready for.

“The whole reason we decided to do this is after the election people wanted to get involved. It’s hard to tell people we have a D.C. office and work only on federal issues when there’s not a tangible way for them to get involved in their community,” said LaSalvia. “Last year’s election helped us to see we really needed that.”