By John Riley on January 14, 2013 @JohnAndresRiley

Dr. Angela McCaskill, the chief diversity officer at Gallaudet University at the center of the local debate over gay marriage, was reinstated last week, following a three-month suspension imposed by the university after it was revealed that she had signed a petition to force the Civil Marriage Protection Act that legalized marriage equality to appear on Maryland’s 2012 ballot. 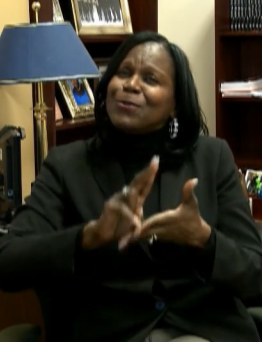 Gallaudet University President Alan Hurwitz placed McCaskill on administrative leave in October after a fellow faculty member filed a complaint against McCaskill for signing the petition, prompting both opponents and supporters of marriage equality to call for him to reverse his decision.

Opponents of Question 6, the referendum seeking to uphold Maryland’s marriage equality law, featured McCaskill in one of their ads urging voters to reject the law. McCaskill later objected to being featured in the commercial.

But several ministers associated with the pro-Question 6 campaign also held demonstrations at Gallaudet to protest McCaskill’s suspension. They, as well as McCaskill’s lawyer, J. Wyndal Gordon, pointed out that signing the petition did not necessarily mean that McCaskill opposed marriage equality, just that she wanted the opportunity to vote on the issue.

In an interview with WJLA’s Mike Conneen, McCaskill reflected on her reinstatement, saying she was “thrilled” to be back at the school.

“I know there are many challenges ahead for me and I look forward to working with the faculty, staff and students here as we move forward to make Gallaudet a more inclusive university and the area of higher education that shows respect for different points of view,” she said.

University officials would not comment on why they chose to reinstate McCaskill, saying only that it was a personnel matter.