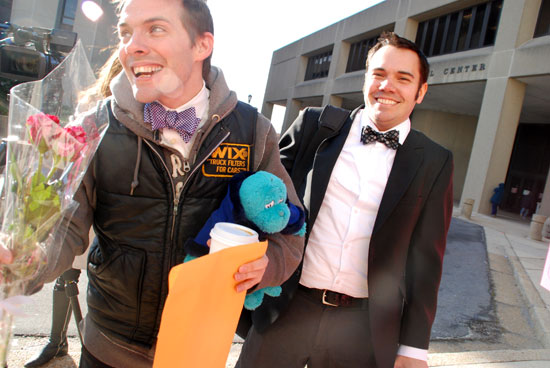 Nic Ruley (L) and Brett King of Chicago just before getting married in the Montgomery County Judicial Center Jan. 2

It may have been a small gesture, but to several Maryland couples it appeared to mean plenty.

Employees of the United Food and Commercial Workers (UFCW) International Union gathered outside the Montgomery County Judicial Center Jan. 2 to celebrate the first official business day on which same-sex couples could legally wed. The workers carried brightly colored signs made of poster board that contained messages of support for same-sex couples who were getting married or picking up marriage licenses in advance of their own nuptials.

Holding pink and white signs that read ”Love Wins!” ”Congratulations! (finally)” ”Labor Supports Equality” and ”Celebrate Marriage Equality,” the UFCW demonstrators stood in front of the Rockville courthouse, scanning the crowd for manila envelopes, the sign that a couple had received a marriage license. As they walked by, demonstrators gave each couple a small bouquet of roses in celebration.

The event, which was planned and carried out by the UFCW employees, was intended as a show of support for those couples getting married, said Iris Packman, one of the lead organizers.

”As a member of the labor movement, I think our job is to fight for everyone, including people who are marginalized in our society,” Packman said. ”I see the fight for equality – whether it’s based on income, or education, or class, race, sexuality – as interconnected. We can’t have true justice in our society if anyone is treated unfairly. I see it as just a seamless connection between the two.”

Packman, a straight woman who got married in September, said that her LGBT friends have told her how important straight allies are in standing up for LGBT rights, which made her presence Wednesday morning all the more important.

Packman also noted that in some Maryland jurisdictions there were reports that members of a notoriously anti-gay Kansas church were planning to protest the legalization of same-sex marriage. While no protestors were spotted at the judicial center, Packman said she hoped the UFCW demonstration of love and acceptance would serve as a counterpoint to such bigotry.

”This should be a celebration,” she said, as she congratulated the various same-sex couples entering and exiting the courthouse, handing them roses.

William Saunders and Mack Simon, of Montgomery Village, Md., who picked up their license Wednesday said they planned to get married Friday, Jan. 4, at Lake Whetstone in Montgomery County. Another couple, Tyranny Smith and Keith Bullock, of Temple Hills, Md., told Metro Weekly that they had been together for more than a year and were excited to be able to marry in their home state.

A short while later, Joe Rouch and Jeff Aberle of Gaithersburg, Md., exited the courthouse, flanked by a large group of family members and friends. The couple, who have been together 13-and-a-half years and are in the process of adopting a 2-month-old girl, said they had woken up earlier in the day feeling nervous and excited about their marriage ceremony.