With a new memoir, humble hero of Tucson shooting shares how he channeled sudden notoriety into action

Shortly after 10 a.m., Jan. 8, 2011, Daniel Hernandez heard what he thought were fireworks at an event for Rep. Gabby Giffords in the parking lot of a Safeway outside Tucson, Ariz.

”Ten minutes into the event I first heard a noise. For a second I thought it might have been fireworks because in Arizona they had recently changed state laws, which allowed people to sell fireworks in parking lots of grocery stores,” Hernandez says. ”But by the second or third bang and someone yelling the word, ‘Gun!’ it really clicked that it wasn’t just fireworks.” 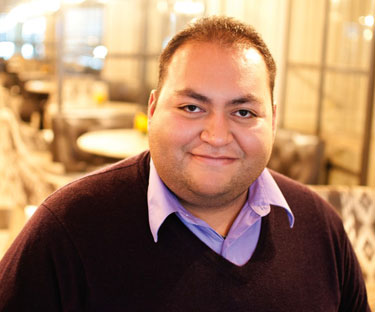 Hernandez, who is gay, was a few weeks shy of his 21st birthday when 22-year-old Jared Loughner, using a semi-automatic pistol with an extended magazine, shot Giffords in the head and then proceeded to fire into the crowd gathered for the Democratic congresswoman’s ”Congress on Your Corner” event. Though just an intern in Giffords’s office at the time, when Loughner opened fire Hernandez acted instantly, crossing paths with the shooter to get to the injured.

Within seconds, Hernandez, also a certified nurse, was at Giffords’s side, propping her against his chest in order to clear her airway as she breathed in blood. Waiting for paramedics to arrive, Hernandez tried to keep Giffords, who remained conscious, engaged and aware of what was happening.

Hernandez would stay with Giffords until they arrived at the hospital. As police and FBI conducted interviews with dozens of witnesses, Hernandez was considered a low priority because police knew his location – isolated, phone confiscated as he waited hours to be questioned, thinking he’d heard a nurse say Giffords had died.

”They wouldn’t let anyone talk to me,” Hernandez says. ”They didn’t want my story changing because I was being influenced by other people.”

Since the shooting that left six dead and 13 wounded and led to Giffords resigning from Congress to focus on her rehabilitation, life for the now 23-year-old hailed as a hero has changed dramatically. Although already out and a member of a local LGBT commission at the time, Hernandez’s sexual orientation was broadcast internationally in the aftermath of the shooting. Today, Hernandez serves on the School Board in Tucson, a seat he has held since 2011. Briefly, he was the youngest openly LGBT elected official in the country. He remains one of the nation’s youngest Latino officials. Earlier this month, he released a memoir about his youth, They Call Me a Hero.

”When I was getting this attention I tried to really shine a spotlight, because getting my foot in the door, getting people to want to talk to me was the first step and that was done because people were interested in what had happened on the 8th,” Hernandez says. ”But after that it was, ‘How do I use this in a way that’s constructive to talk about issues I care about?’ I then ran for School Board in late 2011 won by 63 percent.”