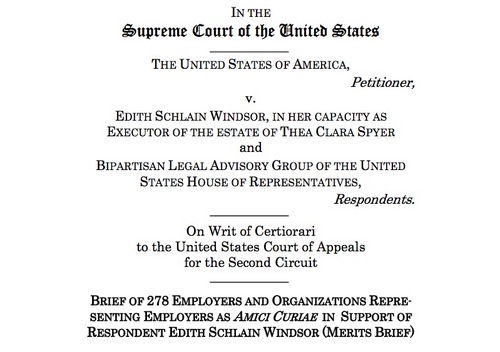 Nearly 300 businesses and city governments filed a brief with the Supreme Court today calling for the 1996 Defense of Marriage Act, which forbids federal recognition of same-sex marriage, be struck down as unconstitutional.

“In the modern workplace, the employer becomes the face of DOMA’s discriminatory treatment, and is placed in the role of intrusive inquisitor, imputer of taxable income, and withholder of benefits,” writes attorney Sabin Willett. “The employer is thus forced by DOMA to participate in the injury of its own workforce morale.”

Our principles are not platitudes. Our mission statements are not simply plaques in the lobby. Statements of principle are our agenda for success: born of experience, tested in laboratory, factory, and office, attuned to competition. Our principles reflect, in the truest sense, our business judgment. By force of law, DOMA rescinds that judgment and directs that we renounce these principles or, worse yet, betray them.

Several of the employers who have attached their names to the brief have spoken out on the issue of marriage equality before. The brief comes one day after attorneys for Edith Windsor, the 83-year-old lesbian widow at the center of the DOMA case before the Supreme Court, filed their brief with the high court. Windsor’s lawyers echoed many of the arguments made in a brief filed by the Obama administration last week, arguing for “heightened scrutiny” in the case and dismissing arguments made by the Republican-controlled House Bipartisan Legal Advisory Group, which has been defending DOMA in court since the Obama administration stopped doing so in February 2011.

Oral arguments are scheduled to begin on the DOMA case March 27, one day after the Supreme Court hears arguments on the Proposition 8 case.