By Justin Snow on February 7, 2013 @JustinCSnow 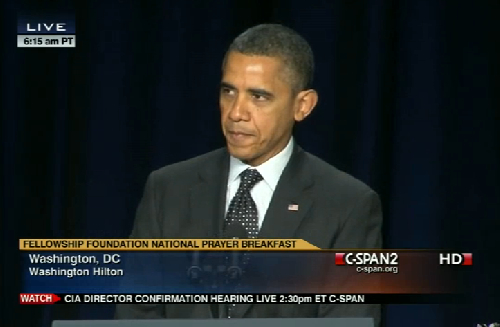 Barack Obama continued the presidential tradition of speaking at the National Prayer Breakfast Thursday morning, marking the president’s fifth appearance at the annual event and his first since declaring his support for same-sex marriage in May 2012.

Held at the Washington Hilton, the Fellowship Foundation, commonly known as “The Family,” hosted the event. The organization is well known for its conservative evangelical views and powerful connections to Republican leaders. It has also been linked to anti-gay legislation in Uganda that would punish homosexual behavior with death.

At the 61st breakfast since the event was first held in 1953, Obama made no mention of his support of marriage equality in his 19-minute speech, according to a press pool report.

“Love your neighbor as yourself,” Obama told the audience of more than 3,000, which included Vice President Joe Biden and members of Congress. “See in everyone, even in those with whom you disagree most vehemently, the face of God. For we are all His children.”

Although the breakfast is not sponsored by the White House, Obama’s participation in the event has been criticized in the past, and was again this year. In a strongly worded statement released by the liberal LGBT-rights group, GetEqual, Managing Director Heather Cronk called on Obama to demonstrate his faith “without simultaneously putting the lives of LGBT people in jeopardy.”

“For another year, President Obama has chosen to set aside his stated values of inclusion in order to attend the National Prayer Breakfast — an event rooted in hatred of LGBT people and covered up by pastries and coffee,” Cronk said.

White House press secretary Jay Carney defended Obama’s participation, stating that the president is not responsible for the views of everyone who attends the breakfast.

“I confess that I haven’t focused on this,” Carney said of the Fellowship Foundation’s anti-gay views during a gaggle with reporters after the breakfast. “The president, as his predecessors have, participates in this. He’s not responsible for the views of every organization or person who participates. His views on these issues, as you just noted in your question, are quite clear.”