The special challenge of staging ''Metamorphoses'' at Arena Stage

A decade after Mary Zimmerman won a Tony Award for her direction of Metamorphoses, her dramatic interpretation of the Ovid classic is still giving her fits. When reached last week as she prepared a new production of the show at Arena Stage, Zimmerman confessed, ”Yesterday was one of the hardest rehearsal days I’ve had in my life.”

The reason is the special challenge of the Fichlander Stage’s in-the-round space. All action takes place in and around a giant pool, and Arena’s ”is the biggest it has ever been,” Zimmerman thinks. It’s also front and center, visible to the audience on all sides. ”Because we have nowhere to hide,” she adds, ”certain tricks that we do have to be completely [rethought].” 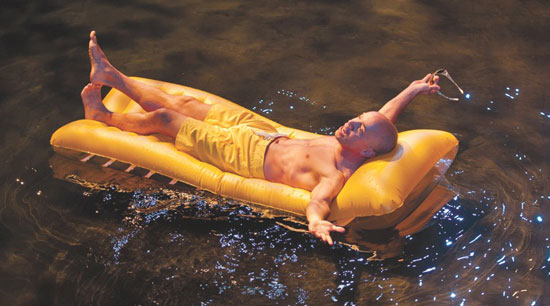 Of course, Zimmerman brought the stress on herself. After an anniversary remount of the show last year in her home base of Chicago, ”a few theaters [nationwide] asked, ‘Will you come and stage it here?’ And I said no to all of them except Arena because of the challenge.” It’s a challenge she first accepted a couple years ago, with her transporting adaptation of Arabian Nights.

”I wanted to give the actors that experience of being surrounded,” she says, ”and such a large audience being so intimate.” Zimmerman brought back many actors from the original run in Chicago and on Broadway. ”It’s sort of a reunion coming back to it,” she says. ”There are three marriages that came out of this show, four children from those marriages.”

Zimmerman, who also won much acclaim for her 2010 adaptation of Candide at Shakespeare Theatre Company, has made it her stock in trade adapting non-dramatic, or classic, texts into dramatic, imaginative, often magical productions. Next up: Disney’s The Jungle Book. The Lincoln, Neb., native says her love for the theater was rooted early, aided by her professor-parents’ regular short-term stays in places such as Paris and London. When she was only 6, for example, she remembers stumbling on rehearsals of A Midsummer Night’s Dream in a clearing in the woods in suburban London. ”The act of seeing adults at play in that way, that was so entrancing to me,” she says. ”I just was absolutely captivated by their working so hard to pretend.” ‘