It’s a bittersweet Valentine’s Day for Virginians like Janice Canterbury and Nadia Malley.

The Arlington couple of 14 years has weathered a bout with cancer, a house fire, the deaths of family members and beloved pets, and even, as Canterbury joked, ”an increase in property taxes.” 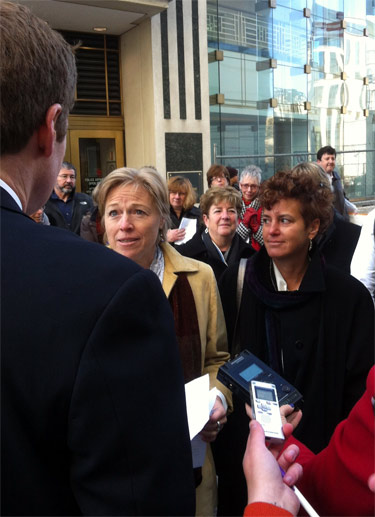 Janice Canterbury and Nadia Malley of Arlington speak at a rally for marriage equality where they asked Paul Ferguson, clerk of the Circuit Court of Arlington County, to grant them a marriage license.

But today when Canterbury and Malley applied for a marriage license at the Arlington County Courthouse, their application was rejected, as expected. An amendment to the Virginia Constitution, the Marshall-Newman Amendment, specifically denies any form of recognition for same-sex couples.

”I know that Nadia and I will be together, with or without marriage, because we love each other,” Canterbury said to Paul Ferguson, clerk of the Circuit Court of Arlington County, who was obligated to reject their application. ”We know we have love, but only a legal marriage can give us the dignity as a valued couple, protect our medical and financial affairs, and declare that we are, in fact, equal, as equal citizens under the law.”

Canterbury and Malley were one of three same-sex couples who applied for a license at the Arlington County Courthouse as part of a series of events held throughout the commonwealth on Valentine’s Day to bring attention to the prohibition against same-sex marriage. The events, billed as ”witnesses to marriage equality,” were co-organized by People of Faith for Equality in Virginia, a group comprised of several LGBT-affirming congregations; Equality Virginia, the commonwealth’s main LGBT rights group; and the Alliance for Progressive Values. Such events were held across the state Feb. 14 at courthouses in Charlottesville, Richmond, Hampton and Winchester, as well as Arlington.

”We must show that all Virginians care about marriage equality,” James Parrish, executive director of Equality Virginia, said in a Feb. 13 press release. ”This Valentine’s Day is an opportunity to stand up for love – we’re excited to work with People of Faith for Equality in Virginia to recognize gay and lesbian couples in communities across the state.”

The Richmond rally featured a press conference with Del. Scott Surovell (D-Fairfax Co.), who in January introduced a resolution to begin the repeal process for the Marshall-Newman Amendment. Surovell’s resolution was killed in a House subcommittee when Republicans voted to table the bill, ensuring that the ban will stay in place for at least three more years.

Pastor David Ensign of Clarendon Presbyterian Church, who was one of several faith leaders taking part in the Arlington rally, said that attitudes have changed in the commonwealth since the approval by voters of the Marshall-Newman Amendment in 2006.

”I think it is accurate to say that if that amendment had not passed when it did, it would not have passed,” Ensign told Metro Weekly immediately after the rally. ”By now, it would not carry a majority vote in a general election in the state of Virginia.”

Ensign said he would like Virginia to proactively end marriage discrimination, but expects the Supreme Court will determine the same-sex marriage ban unconstitutional before lawmakers in Richmond take action.

”I’ve been doing this for a number of years and it is always a profoundly moving thing to witness,” Ensign said of rallying for same-sex couples’ access to civil marriage. ”I remember the first one we did here. We were actually in the clerk’s office. I sat with the couple while they filled out the forms. They did it at a computer kiosk, and it was all very clerical.

”That form itself is such a profound reminder, in its simplicity and its bureaucratic clarity, that we’re just talking about sons and daughters of moms and dads and grandparents,” Ensign continued. ”American citizens, who are no different from anybody else, asking that their love be recognized in the same way that my and my wife’s is.”

Tom Nichols, who with his partner, Dan Chadburn, also sought a marriage license at the Arlington County Courthouse, led the rally attendees in song, covering ”Gentle Angry People.” He also performed his own ”Give Them Love,” a song he wrote for his identical twin’s marriage to a woman 25 years ago. After being denied a license, Nichols and Chadburn, of Falls Church, said they had plans to go to the District where they would sign official marriage-license papers. The couple plans to have a formal ceremony and reception June 1.

Ferguson, the clerk, offered the couples at the rally an opportunity to speak. Nichols told the crowd of about 50 people that he and Chadburn had chosen to get married on Valentine’s Day because it was the 60th anniversary of Chadburn’s parents’ marriage. He told Metro Weekly afterward that he had mentioned the significance of that anniversary – as well as his background as a Virginia native and his four brothers marrying in the commonwealth – to illustrate how arbitrary Virginia’s law is in denying him the right to marry the person he loves.

”I just wanted to explain how he’s is blood of my blood, and he’s allowed to marry. But Virginia won’t recognize us as a married couple,” Nichols said of his identical twin, just before he and Chadburn left to go to the District and apply for their marriage license.

For Canterbury and Malley, even though their application was denied, the rally symbolized the support they have received from their faith community, family and friends who have gotten to know them and see how strong their relationship is.

”Our neighbors, our family, everyone wants us to take a stand on this, because they’re behind us,” Canterbury said after the rally. ”And I appreciate it because over 20 years ago when we met, they weren’t. They were skeptical, and our families had concerns about religious beliefs and so forth. But they’ve come around and they’ve transformed. And because the faith community is here backing us, I think other people can, too, once they get to know us and who we are.”

”I have a pre-existing health condition, and I’m unable to get on my partner’s health insurance,” Malley said, explaining that Canterbury works for the federal government. ”That is a very real economic discrimination. A lot of people don’t realize that, but it affects us on a daily basis.”

Canterbury also had advice for General Assembly lawmakers in Richmond: Don’t use fear or political difficulty as an excuse for inaction.

”While it may be complicated for them to change some laws, it’s far more complicated for gays and lesbians to live our lives every day under a shadow of not being equal under the law,” Canterbury said of the complicated process to repeal the Marshall-Newman Amendment. ”I feel that’s no excuse, just because it may be a bit complicated to change something written on a piece of paper. Our lives and the struggles and hoops we go through on a day-to-day basis are far more frightening.”

John Riley is the local news reporter for Metro Weekly. He can be reached at jriley@metroweekly.com
← Previous Story DC Eagle Celebrates Scarlet's
Next Story → D.C. Is Tops in Gallup's LGBT Tally