In one of the most memorable moments during today’s Supreme Court arguments on DOMA, Justice Elena Kagan shut down one of the key arguments being made by the lawyer for House Republicans. 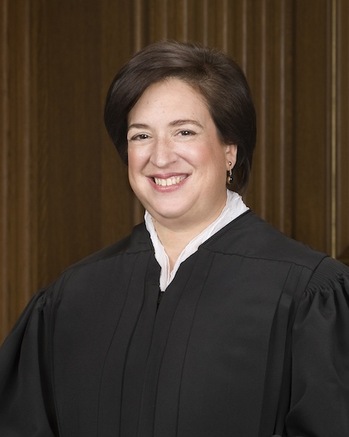 During questioning of Paul Clement, the lead attorney defending DOMA for the Republican-controlled House Bipartisan Legal Advisory Group (BLAG), Kagan took issue with the argument that Congress approved the Defense of Marriage Act in 1996 in order to provide uniformity to the states.

According to Clement, there is nothing unusual about the federal government getting involved with marriage, as they did in prohibitions on polygamy and providing benefits to the spouses of freed slaves after the Civil War. In 1996, Clement said, the federal government had reason to act unusually as no state had ever recognized same-sex marriage before and Hawaiian courts were weighing the issue.

And that’s when Kagan pounced.

“Well, is what happened in 1996 — and I’m going to quote from the House Report here — is that ‘Congress decided to reflect an honor of collective moral judgment and to express moral disapproval of homosexuality.’ Is that what happened in 1996?” Kagan asked to gasps and murmurs from the courtroom.

Clement added that while the House Report from when DOMA passed provides reasoning BLAG is not invoking to defend DOMA, it made sense for Congress to act when “an unelected State judiciary in Hawaii is on the verge of deciding this highly contentious, highly divisive issue for everybody.”

It was one of several moments that elicited audible reaction from the otherwise hushed courtroom audience. Justice Ruth Bader Ginsburg — another liberal justice likely to argue DOMA should be struck down — caused a stir of laughter when she said DOMA creates separate classes of marriage: “full marriage, and then this sort of skim milk marriage.”