When it came time to actually sit down and play Tomb Raider, the latest entry in the renowned franchise that has spanned three console generations and garnered millions of fans, I did so with more than a little skepticism. Could Crystal Dynamics, who took over the reins to Tomb Raider in 2006, successfully reboot the iconic Lara Croft? Could they deliver a game that satisfies and delights in the same way the originals did back in the days of the PlayStation? Above all else, I wondered, in an era where Sony’s Nathan Drake and the Uncharted franchise sit at the top of the action-adventure mountain, is Lara Croft, gaming’s most iconic female character, even able to remain relevant?

Within the first hour of gameplay, my answers were unequivocally ”Yes.” 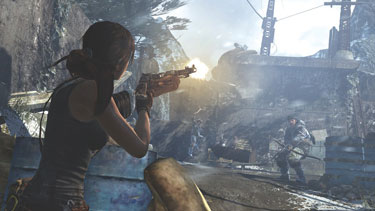 What Crystal Dynamics has accomplished is nothing short of astonishing. Tomb Raider strips away the storylines that have built up over three generations of games, and takes us back to Lara’s youth. Here, she isn’t the ass-kicking, puzzle-solving, gun-toting archeologist we all know and love. Lara Croft in this game is human, fresh out of college and ready for adventure. The opening scenes see our protagonist involved in a shipwreck, thrown onto the beaches of a mysterious island, kidnapped, bound and left for dead. And with that, the theme for the whole narrative arc, and Lara’s development, become clear — survival. We don’t start with all the tools needed to run, guns-blazing, into a guarded tomb. Lara must learn her skills along the way, teaching herself how to hunt, gather, make shelter, climb buildings and cliff faces, fight enemies and, eventually, wield weapons.

The initial hour of gameplay is heavily scripted, with little error for the player to explore the vast, dense world that has been gifted to them. Quick-time events, tunnels, a very stripped-down tutorial all guide the player through the basics of gameplay, as Lara escapes her initial captor, and is thrown, almost literally, out into the island. It’s here that Tomb Raider‘s contemporary influences sneak in. If anyone has played Far Cry 3, then the method of hunting animals and collecting food will be very familiar, as will the new ”perks” system, which allows for the upgrading of Lara’s core skills, teaching her better weapons handling, greater survival instincts, more efficient resource scavenging and more.

Hunting for food introduces us to combat, with Lara gaining a bow. The bow features throughout the game, but is initially used just for hunting. Indeed, Lara spends her first hour exploring, gathering food, searching for her shipmates and trying to ascertain more information on her setting.

Controlling Lara through this is easy, with an intelligent camera set-up and familiar controls removing any barrier to instantly grappling up buildings or jumping across ravines. While lacking the fluidity of Assassin’s Creed, Tomb Raider manages traditional platforming with aplomb, with Lara hurling herself across gaps, scrabbling up walls, and gingerly stepping out over makeshift bridges. Uncharted‘s Nathan Drake is an obvious influence here, as Lara approaches these tasks with a suitably human response, thumping into the sides of cliffs, gasping as she scrambles to climb over a ledge, shouting in agony as she falls and showing all the signs of a person out of her comfort zone and pushing her body to the limit. Intelligent design and easy-to-spot destinations make traversing the environment a constant delight — and fans worried about Tomb Raider‘s ability to adhere to the platforming of its predecessors will be glad to know Lara has never looked better jumping, swinging and climbing through the game’s numerous scenes.

Lara’s first kills in the game reinforce the fragility of her youthful character — she apologizes to a deer after killing it for food and sobs in fear and agony as she defends herself against wolf attack. She uses her bow begrudgingly, and combat is slow to start. Indeed, Lara’s iconic gun-play isn’t introduced until the player has mastered the first few opening scenes, and Tomb Raider‘s darker setting is emphasized as Lara takes her first human life. She breaks down, crying, shaking, apologizing for the kill. However, in a slightly awkward transition, this is the last we see of the Lara afraid of taking a life. Combat immediately switches to the offensive, with gun- and bow-play coming into full effect, as Tomb Raider‘s dynamic combat system opens up.

Combat is tough, with intelligent enemies making use of the landscape just as easily as Lara herself. Scale a building to escape gunfire and enemies will follow, with some climbing after you, and the rest peppering the player with arrows, bullets, molotov cocktails and dynamite. Environments are destructible, with fences and boxes splintering and cracking, stone pillars and walls crumbling, and wooden fences and cloth items setting alight as enemies rain fire upon Lara. It’s a hectic, often tough affair, and I died frequently due to being overwhelmed by the quantity of enemies attacking me from different angles. Mercifully, Tomb Raider has a very strong auto-save feature, so should you die you’ll often be dropped back into action moments before you left it — which also applies to any misjudged moves while scaling walls and leaping gaps outside of combat.

Rhuaridh Marr is Metro Weekly's managing editor. He can be reached at rmarr@metroweekly.com.
← Previous Story GTA V: Rockstar teases a fresh batch of screenshots
Next Story → New Xbox to be announced on May 21st