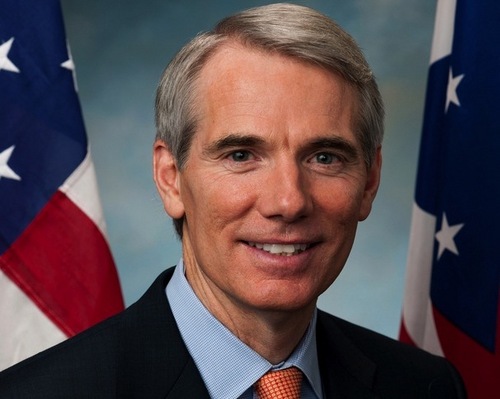 Ohio Republican Sen. Rob Portman announced his support for marriage equality shortly after midnight Friday, saying that his reversal on the issue came after his son came out to him as gay.

“I’m announcing today a change of heart on an issue that a lot of people feel strongly about that has to do with gay couples’ opportunity to marry,” Portman told CNN in an interview recorded in his Senate office on Thursday.

The carefully orchestrated and groundbreaking announcement marks the first time a current Republican member of the Senate has openly endorsed same-sex marriage and comes a little more than a week before the Supreme Court is expected to hear arguments in two landmark cases regarding the right of same-sex couples to marry. CNN along with four newspapers — The Columbus Dispatch, the Dayton Daily News, The Plain Dealer and the Cincinnati Enquirer — all reported the embargoed news after Portman’s staff invited them to hold interviews with the Buckeye State senator on Thursday.

Portman, who was on the shortlist to become Republican presidential candidate Mitt Romney’s running mate, said his evolution on the issue came after his son, Will, came to him two years ago as a freshman at Yale University and “announced that he was gay, that it was not a choice.”

“It was who he is and he had been that way since he could remember,” Portman told CNN. “Jane and I were both surprised, very surprised, but also very supportive of him. Our reaction was not about policy or positions. It was about him as a son and letting him know we were 110 percent supportive of him.”

Portman marks the first Republican senator and third Republican member of Congress to openly endorse same-sex marriage. In the House of Representatives, Reps. Ileana Ros-Lehtinen of Florida and Richard Hanna of New York have both come out in favor of marriage equality.

“I thought it was the right time to let folks know where I stand so there’s no confusion, so I would be clear about it,” said Portman, who added that he wanted to make his views known as the Supreme Court considers the DOMA and Proposition 8 cases.

Serving in the House of Representatives from 1993 to 2005, Portman voted for the Defense of Marriage Act currently before the Supreme Court. He also supported a constitutional amendment banning same-sex marriage and voted against same-sex couples’ right to adopt children in D.C.

Despite those previous positions, it was the act of coming out by his son that led to a period of introspection for the junior senator from Ohio.

“It allowed me to think of this issue from a new perspective, and that’s of a Dad who loves his son a lot and wants him to have the same opportunities that his brother and sister would have — to have a relationship like Jane and I have had for over 26 years,” Portman said, according to The Plain Dealer. According to Portman, he looked to his faith and the “the overriding message of love and compassion” in the Bible, and consulted with many since his son’s coming out, including former Vice President Dick Cheney, who has a gay daughter and supports marriage equality.

“Do the right thing. Follow your heart,” Cheney told Portman.

“If there was any doubt that the conservative logjam on the issue of civil marriage for committed gay and lesbian couples has broken, Senator Portman’s support for the freedom to marry has erased it,” said Gregory Angelo, executive director of the Log Cabin Republicans, in a statement. “Senator Portman’s evolution on this issue highlights how personal it is for Americans — whether they’re the Junior Senator from Ohio or your next-door neighbor, all Americans have a gay friend, colleague or family member, and understand them to be as deserving as their straight counterparts of the inalienable rights of life, liberty, and the pursuit of happiness that are the promise of the United States.”

Although Portman said he would support overturning Ohio’s ban on same-sex marriage should voters bring the issue to referendum, he said he believes this remains an issue best dealt with at the state level. In a column published in today’s Columbus Dispatch, Portman writes that the Supreme Court should not rule sweepingly.

“Judicial intervention from Washington would circumvent that process as it’s moving in the direction of recognizing marriage for same-sex couples,” wrote Portman. “An expansive court ruling would run the risk of deepening divisions rather than resolving them.”