WNO presents soprano-watcher's Norma, and a fine evening for anyone who likes their betrayals bel canto beautiful

In the words of Jean Genet, ”Anyone who hasn’t experienced the ecstasy of betrayal knows nothing about ecstasy at all.”

And anyone who likes their betrayal operatically ecstatic must seek out Bellini’s Norma. For despite its backstory of Gallic druids versus their Roman occupiers, Norma is your ultimate destination for the agony and outrage of discovering that you have been replaced by a younger model (and not just any flibbertigibbet, but one under your own care and control). 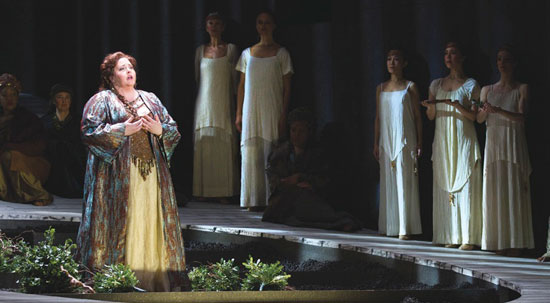 And even if it comes at the beginning of the opera and only alludes, through its Druid prayers, to the tumult of emotional chaos, Norma’s mournful aria ”Casta Diva” epitomizes for many the abject sorrow and loss of the most intimate of betrayals. It is the first (and most telling) event of an emotionally and vocally challenging opera and has, not surprisingly, drawn some of the genre’s greatest names, each with their own ardent followers. (For some it will always be Maria Callas, for me, Joan Sutherland.)

It’s no surprise that one could have heard a pin drop on opening night, when soprano Angela Meade began the slow, ritualistic walk among her acolytes announcing, along with Bellini’s gently ponderous notes, this most famous of arias. And the bottom line is that does not disappoint. Poised and suitably majestic, Meade brings with beautiful, silken control all of the necessary delicacy and grand poignancy of this sublimest of songs. If she is young enough to grow further into the role, she is already wonderful enough to deliver a tear to the eye.

And, even with this triumph behind her, Meade only grows stronger and more at ease as the evening progresses. Her duet with Adalgisa, the “other” woman (who is as shocked as Norma to discover that they are in love with the same man), ”Mira, o Norma,” is confidently and vigorously accomplished. At the finale, when Norma decides that druidic honor and personal heartbreak are best served by death, Meade brings much soul to her mournful plea that Oroveso (her father and an elder priest) watch over her children. By the time she has exacted his promise, her affirmation that she is at last at peace is all the more gloriously gut-wrenching.

These are memorable moments, even if in earlier scenes Meade’s slightly lukewarm bond with her children never quite convinces, especially in the scene in which she contemplates killing them to spare them the shame and danger of Pollione’s abandonment. Indeed, she suffers from a phenomenon that has lasted through the ages; that her children seem far more attached to their young nanny, Clotilde, played with notable subtlety and sung affectingly by Julia Mintzer. But even if Meade doesn’t yet project such dimensions (and one feels she eventually will), she gets so much else right in this remarkably self-possessed character, it is hard to over-quibble.

Also missing some of its stuffing, but through no fault of Meade’s, is the pivotal scene in which Norma and Adalgisa realize that Pollione is their mutual obsession. Director Anne Bogart overthinks it with some unnecessary handling of picture-bearing lockets and Cad of the Year Pollione’s oddly tentative entrance. Thus deflated, the moment fails. Matters are not helped generally by conductor Daniele Rustioni, who, despite drawing some good power and continuity, allows, at other times, a certain flaccidity.

Yet even with these issues, the evening is more than carried by Meade and Dolora Zajick, who offers a convincing Adalgisa, despite appearing somewhat older than Meade. An elegant mezzo-soprano, Zajick is a worthy match for Meade, with power, subtlety and high expression. And with her low-key characterization of Adalgisa, as the drama mounts the focus narrows to faces and voices, which is just where this Norma belongs.

This austerity of vision is reflected in the effective set of Neil Patel, who with a whiff of Kandinsky, contrasts the geometry of a minimalist foreground with a sky that hangs like a chaotic maw. Against the powdery whites of a steeply sloped stage, Norma’s altar (and later garden) appears as a dark and earthy disk. Altogether, it nicely complements the stark intensity of this Norma and the emotion that roils beneath her public life. If Bogart’s ideas for the chorus never quite gel and the acolytes’ ho-hum dances are a missed opportunity, it’s not enough to dispel this palpable mood.

Another missed opportunity is Rafael Davila’s Pollione. Not helped by a rather incongruous contemporary leather duster, Davila never quite connects with either of his formidably poised women, despite a convincingly masculine energy. Neither can he breech the gap vocally, for although he offers some pleasing oomph, there is an unevenness throughout. Not quite ready for his vocal close-up, tenor Mauricio Miranda as Flavio, Pollione’s friend, is expressive and attractive in tone and gives the small role some decent color.

For the men, the true vocal counterpoint to Meade and Zajick comes with bass Dmitry Beloselskiy in the role of Oroveso, Norma’s father. Matching the women in stage wattage and singing with a gorgeously sonorous yet expressive command, Beloselskiy helps to deliver the necessary gravitas to Norma’s question of honor. In a character that might easily have turned cardboard, he gives us a man who wanted to but couldn’t ignore his principles.

So, although not perfect viewing, this is a soprano-watchers’ Norma and a gratifying evening for anyone who likes their betrayals bel canto beautiful.