Home / News + Politics / Poliglot / With momentum on their side, young conservatives rally for marriage equality

With momentum on their side, young conservatives rally for marriage equality 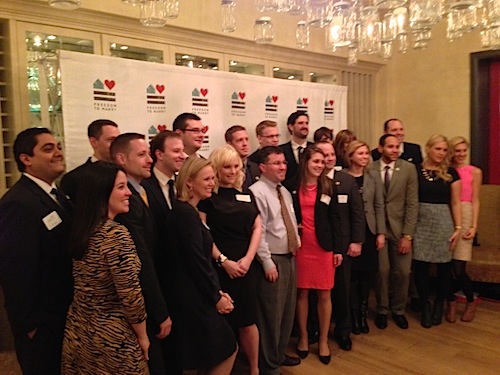 With one week to go before scheduled Supreme Court arguments in two landmark marriage-equality cases, the next generation of conservatives are letting it be known that they are not members of their grandfathers’ Republican Party.

“Being a Republican who supports gay marriage is a bitch,” said Meghan McCain, the outspoken daughter of Arizona Republican Sen. John McCain, at a Monday reception for Young Conservatives for the Freedom to Marry. But, she says of her support of marriage equality, “It has been the greatest thing I’ve ever done in my life. I’m so proud to support my LGBTQ friends.”

McCain was one of several young conservatives who attended the event at the Lincoln restaurant in D.C. to mark the relaunch of the organization and welcome the addition of a new campaign manager and 20 new members of the group’s leadership committee.

For those in attendance, it was just part of what has been a whirlwind of positive news in the fight for marriage equality over the past week. Earlier that day, former Secretary of State Hillary Clinton became the latest high-profile politician to voice support for same-sex marriage, and a Washington Post-ABC News poll released Monday found support for same-sex marriage at new record highs.

According to the poll, 58 percent of Americans believe same-sex couples should have the right to marry, compared to 36 percent who oppose. The numbers were a near reversal compared to a decade ago, in 2003, when 37 percent supported same-sex marriage and 55 percent opposed.

That number was the latest in a series of key events over the past four days that began last week with an overwhelming turnout for a pro-gay panel at the Conservative Political Action Conference and the endorsement of marriage equality by Ohio Republican Sen. Rob Portman after he learned his son is gay. For the next generation of Republican voters, this is not a debate that has ever been needed, say advocates. On the question of whether same-sex couples should have the right to marry, there is no question.

“Everybody I talk to my age out of college, this is just an issue we strongly believe in,” Liddy Huntsman, the 24-year-old daughter of former Republican presidential candidate and Utah Gov. Jon Huntsman, told Metro Weekly. Last month, Jon Huntsman endorsed same-sex marriage in a column published by The American Conservative.

While that divide is reflective in the leadership of the GOP (as recently as Sunday House Speaker John Boehner [R-Ohio] said he “can’t imagine” ever supporting same-sex marriage), there is some awareness of the party’s image problem. An “autopsy” report of the party released by the Republican National Committee yesterday recommended outreach to the gay community as more and more young voters are turned off by the GOP’s message.

“What one U.S. senator can do…,” conservative commentator Margaret Hoover told Metro Weekly at Monday’s reception, emphasizing the influence of a politician like Portman. “This feels like the Republican Party I want to be part of.”

What’s more, marriage-equality supporters have momentum. Although marriage-equality opponents like the National Organization for Marriage have sought to rally supporters, young conservatives have been visibly absent from their efforts. “There’s no steam or enthusiasm or momentum on their side,” Hoover said, adding that the relatively muted negative reaction from Republicans to Portman’s announcement is a sign that there’s “room at the table for conservatives who support the freedom to marry.”

What other national Republican leaders will lend their voices to the fight for marriage equality before Supreme Court arguments next week remains to be seen. For Meghan McCain, she hopes her father will join their cause one day.

“I wish he would come around,” McCain told Metro Weekly. “I think it would be really significant just in that he’s such an older statesmen in the Senate — he’s older as well. He’s just from a different generation, but I’m an eternal optimist and I still think he’ll come around.”

[Photo: The new members of the leadership committee for Young Conservatives for the Freedom to Marry (Credit: Justin Snow/Metro Weekly)]