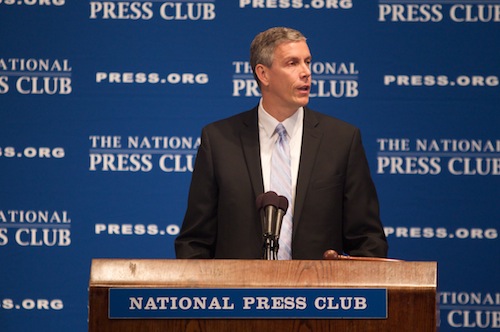 The incomes of both parents in a same-sex relationship will begin to be counted by the federal government when determining student aid, the Department of Education announced Monday.

Beginning with the 2014-2015 Free Application for Federal Student Aid (FAFSA), gender-specific terms like “mother” and “father” will be replaced with terms like “Parent 1 (father/mother/stepparent)” and “Parent 2 (father/mother/stepparent).” The updated form will also provide an option for students to describe their parents’ marital status as “unmarried and both parents living together.”

According to Education Secretary Arne Duncan, the move seeks to make the awarding of federal student aid more fair.

“All students should be able to apply for federal student aid within a system that incorporates their unique family dynamics,” Duncan said in a statement. “These changes will allow us to more precisely calculate federal student aid eligibility based on what a student’s whole family is able to contribute and ensure taxpayer dollars are better targeted toward those students who have the most need, as well as provide an inclusive form that reflects the diversity of American families.”

FAFSA has previously only collected income information from students’ parents who are married. With these changes, income that otherwise would not have been accounted for when determining federal financial aid allocations will now be considered. Although the move creates a more level playing field, it could decrease the financial aid received by some students with same-sex parents. The change in language mirrors that used in the Higher Education Act, which generally does not use gender-specific terms like “mother” and “father.”

According to a release from the Department of Education, the previous collection of information only about a student’s married parents “has excluded income and other information from one of the student’s legal parents (biological or adoptive) when the parents are unmarried, even if those parents are living together. Gender-specific terms also fail to capture income and other information from one parent when a student’s parents are in a same-sex marriage under state law but not federally recognized under the Defense of Marriage Act.”

The announcement was praised by advocates, who applauded the Education Department’s decision as a step toward inclusion.

“Students seeking financial aid want to know that the federal government will recognize their families and not treat them differently based on their parents’ sexual orientation, gender identity or marital status,” said Emily Hecht-McGowan, director of public policy for the Family Equality Council, in a statement. “Federal forms that are inclusive of all families are important tools to help LGBT parents ensure their children receive the legal and financial protections they need and the opportunities in life that they deserve.”

The Education Department is scheduled to publish these changes in the Federal Register for public feedback later this week.