''Bioshock Infinite'' isn't just a great game, it's one of the great games. You can't call yourself a true gamer until you experience it.

Bioshock Infinite carries a great deal of hype on its shoulders. The original Bioshock is revered as one of the greatest games of this generation, an example of games as a medium not only for incredible storytelling, but as interactive art. But to judge Bioshock Infinite in comparison is a cruel belittlement of its genius. It’s not merely a sequel — though, strictly speaking, it isn’t that either — it’s a new game, a new experience, that merely draws inspiration from its elder sibling. Free from the backstory and loyalties of the previous two games, Bioshock Infinite aims to offer something that has it all — story, action, adventure, character development, replayability and emotional connectivity. It’s a lot to fit into one title, but Bioshock Infinite, heavy with expectation and content, somehow manages to stay afloat. 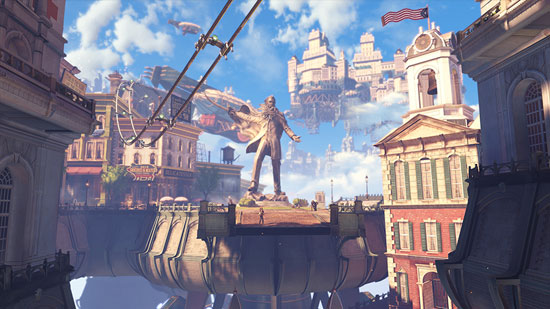 Words can’t do justice to the world that awaits when you first load up Infinite. Taking place in a steampunk version of 1912, complete with retro-futuristic technology, Infinite’s primary setting is the floating city of Columbia. Yes, floating. Gone are the dingy underwater corridors of Rapture, Infinite is bright, open, and endlessly expansive. The first few minutes of gameplay see our protagonist, Booker DeWitt, a private investigator, sent to the city in search of a girl. The opening sequence, and Booker’s (and the player’s) first glimpse of the city, has to stand as one of the greatest of any game. When you take your first steps outside, and are able to freely explore the game’s locales, a breathtaking experience awaits. City blocks drift all around, floating separately through the clouds in ceaseless motion. Buildings of varying size and shape hover between one another, docking and undocking, moving randomly and gently swaying in the breeze that constantly rustles lazily through the city streets. Sunlight beats warmly across late 19th century buildings; broad, cobbled roads teem with the inhabitants of Columbia going about their daily business; birds fly overhead; and posters touting sales, events and propaganda fill the spaces between shop signs and adorn building fronts.

This propaganda is the first hint that Columbia is no normal floating city, and as you stroll through the vibrant streets, two things become worrisomely clear — everyone and everything has heavy religious tones, and every face is white. As you play through the game, unlocking further backstory and detail, the reason becomes clear — Columbia is a city established as a new ark, a refuge for white, middle-class Americans to live a pure, faithful life free from the worries and sins of those on land. Originally launched as a floating world’s fair demonstrating the best that America had to offer, it quickly became a closed, cult-like hotbed of zealotry, led by a self-proclaimed prophet, Zachary Comstock. The impact on the day-to-day lives of the citizens is palpable, and Infinite‘s incredible graphics go a long way towards helping bring the richness and character of the city to life.

From the open, beautiful buildings of Columbia, the opulent, finance-driven residences of Emporia, to the gargantuan, industrial factories and shanty-towns of Finkton, where the game’s non-white communities live in squalor, the visual onslaught that Infinite wreaks on your eyeballs is almost overwhelming. I often found myself wandering away from the main story just to stare at a sign, or explore a building, or search for additional clues and places that would unlock further information about my surroundings. Whether traversing streets filled with shoppers, riding the city’s skylines (which connect areas with roller-coaster style rails that goods and people can travel on), walking through dilapidated makeshift homes in the industrial sector or exploring rooms and corridors of each building, Bioshock Infinite offers a setting dense with detail, color and vibrancy. The world stretches almost endlessly as you gaze over it, and levels are massive in scope. Early in the game you visit Columbia’s answer to a beach holiday — a floating seaside resort — and watching sand and waves mix with clouds and floating buildings, all as people frolic in the water, sunbathe and stroll along the promenade, makes for a confusingly brilliant spectacle. The physics of the world are mind-boggling, but the city never feels unrealistic, despite its obviously fictional setting — such is the effort of the game’s designers in crafting each nuance and detail. Columbia feels like it could exist, with a natural flow in its creativity and planning. 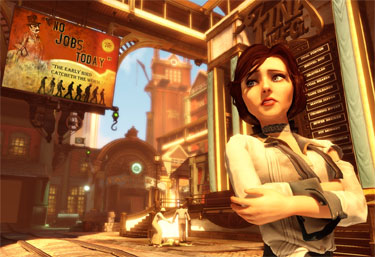 It’s not perfect, however. All too often you’ll move to study something in detail, and be met with a particularly ugly texture, or graphical glitch, and during heavy action scenes the game can noticeably slow down, with screen tearing and framerate drops. These are infrequent, fortunately, and never detract from gameplay. What does distract, however, is character modeling. Main and secondary characters look fantastic, with great animations and excellent design. The people that fill the streets and the enemies that bombard you with gunfire? Not so much. Don’t be worried if you meet the same female and male characters over and over as you walk around — your game isn’t broken, that’s just all the variety available. Aside from different clothes, the same repeating facial features are an odd design choice that act as a minor barrier to immersion. Too often I’d approach a gathering of people to listen to their conversation, and see three men, all identical, talking to each other. Enemies are even more repetitive in design, but you’ll be too busy shooting to really care.

Which brings us neatly into gameplay. Infinite is a first-person game, and as such relies on tried-and-tested Bioshock gun-play, with a variety of customizable and upgradeable weapons, ”vigors,” which offer supernatural abilities to the user, and gear, which when worn offer similar abilities and strengths to vigors.

At first, gun-fights can feel a little clunky, especially with the weaker weapons initially offered, but this decreases with time — and once new weapons are unlocked and upgraded, the sense of damage each offers is greatly enhanced. It’s vigors that offer the most fun. Relying on a supply of salts, they are collectible abilities that unlock special powers and aids for the player. One grants the ability to create a magnetic shield that captures all bullets fired at the player, which can then be launched at enemies. Another summons a flock of murderous crows, which strip their victim’s flesh from the bone before flying away. I favored lightning and fire, setting electricity traps for unsuspecting enemies to stumble into, before launching burning fireballs at them, which explode with devastating effect. Each is accompanied with a gorgeous animation, and when a new vigor is discovered, DeWitt’s hands rise and transform as the new power seeps into his being — gaining the ability to cast fire, for instance, sees his hands temporarily turn to flame and ash, all viscerally presented, and it’s fascinating to watch. At the midway point, when several vigors are unlocked, and guns can be upgraded, fights and action sequences can start to feel overly simple, as the player has a lot of power over enemies. This coincides with a lull in the story that feels a little too much like padding. Gunfights last longer, with each area entered triggering a new encounter, and each level throwing further assaults at you. Even on normal, it occasionally feels like a slog just getting through these, as the sluggishness of the controls proves to be a tiresome detriment. However, as the story picks up steam again, the difficulty begins to ramp up and the challenge switches from killing wave after wave to just trying to stay alive, at which point gameplay retains its former composure and the challenge of using the game’s environment coupled with the arsenal at your disposal to best each foe becomes the primary focus.

What really binds the world of Bioshock Infinite together is its aural quality. Voice acting is superb, with Booker not only engaging with other characters, but constantly commenting on his surroundings and actions. Cut scenes, which use the in-game engine and occur seamlessly while playing, are lavish acting exercises, and let the character animations and vocal talents of the two leads shine through. Secondary characters are similarly well-rounded, offering up stellar performances that bring the pain, pleasure, good and evil of the cities’ inhabitants to life, and deepen the immersion in the world. Even random characters met on the street engage in meaningful conversation with one another, and one of the game’s delights involves walking through crowds and listening to their social commentary, daily troubles, and useful insights into current events and the history of the city. Background noise is similarly well-rounded — crowds chatter and bustle, buildings creak and groan as they float, guns fill rooms and courtyards with noise, vigors burst with energy as they are used, enemies howl, citizens scream and music from radios and phonographs complement the in-game score beautifully. The music of the game is a particular highlight, with the score swelling between dramatic and subtle where appropriate, fitting the mood of each scene perfectly. Radios play amusingly time-appropriate covers of songs from later decades, such as a ragtime cover of ”Tainted Love,” explained in-game as ”the music of tomorrow, today.” My favorite is a barbershop quartet remix of ”God Only Knows.” It’s sublime.