We must defend liberty and equality from fear and intolerance

On April 19, after the arrest of bombing suspect Dzhokhar Tsarnaev (hereinafter “Johar”), residents of Boston’s Watertown neighborhood applauded the police and chanted, “USA! USA!” Some American Muslims watching on TV had mixed emotions, taking the celebration as a xenophobic display. I took it as an expression of relief and gratitude. But my Muslim friends have a point. In the wake of a violent attack, it is easy to target minorities for group blame. With sufficient provocation, any crowd might turn into a mob.

April 19 was the National Day of Silence. Some reporters could have helped themselves by joining it. Among the news outlets in too great a hurry last week to check their stories were the New York Post, which left one falsely accused teen afraid to leave his house; and CNN, where John King quoted an unnamed source describing the suspect as “a dark-skinned male.” 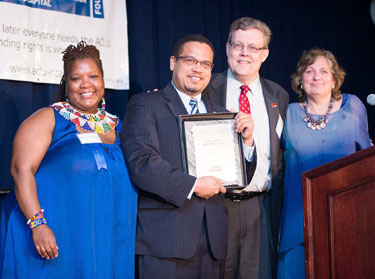 Then there were the opportunistic politicians. Rep. Peter King (R-N.Y.) demanded greater surveillance of Muslim Americans. In this he echoes demagogues like Newt Gingrich and Rep. Jeff Duncan (R-S.C.), who warn of a threat from Sharia law.

Duncan also casts doubt on ammunition purchases by the Department of Homeland Security. He is part of a long effort to convince gun owners that Big Brother wants to disarm them and impose tyranny. Similar attacks by Wayne LaPierre on federal law enforcement officers in 1995 caused George H.W. Bush, a former member of whose Secret Service detail was killed in the Oklahoma City bombing, to quit the NRA in protest.

Another Republican with the gumption to resist the fanatics is New Jersey Gov. Chris Christie, who in 2011 defended a Muslim judge he had appointed: “Sohail Mohammed … is an outstanding lawyer and played an integral role in the post-September 11th period in building bridges between the Muslim-American community in this state and law enforcement.” Such bridge building is what responsible leaders should be doing.

By contrast, Sens. Lindsay Graham (R-S.C.) and John McCain (R-Ariz.) have demanded that Johar, an American citizen, be tried as an enemy combatant. They would defend our freedoms by selectively revoking them. No less a conservative than Justice Antonin Scalia, in Hamdi v. Rumsfeld (2004), dissented on the detention of U.S. citizens as enemy combatants.

Four days before the bombings, I had the honor of introducing Rep. Keith Ellison (D-Minn.) as keynote speaker at the annual dinner of ACLU of the Nation’s Capital. Ellison is a civil rights attorney and the first Muslim elected to Congress. I described the 2011 hearings held by Rep. King on the alleged radicalization of American Muslims, at which Ellison testified against targeting people based solely on their faith. He told the story of Muhammad Hamdani, a first responder who died saving others at the World Trade Center on 9/11. Ellison’s heartrending story left King unrepentant.

After being elected in 2006, Ellison said he would take his ceremonial oath of office using the holy book of his faith. Radio host Dennis Prager, apparently unfamiliar with the First Amendment, was outraged and demanded that it not be permitted. Ellison’s response was sublime: He borrowed Thomas Jefferson’s copy of the Quran from the Library of Congress.

Ellison thus demonstrated an effective response to political wedges based on racial, religious or other differences: Deny your opponents the patriotic high ground. This was a lesson I learned from gay-rights pioneer Frank Kameny. “I fought in frontline combat for my country,” he thundered, demanding equality under the law.

Liberty and equality are part of our national DNA. We must defend these values against anyone who pursues power through fear and intolerance. By upholding the best in one another, we can defeat those who would exploit the worst.

Richard J. Rosendall is a writer and activist. He can be reached at rrosendall@starpower.net.