It hit Alexander AJ King when he was only in high school.

”I was getting calls back to back to back from my friends saying, ‘AJ, I just found out I’m positive,”’ he says. The calls came from fellow gay, African-American boys in their teens. ”I was like, ‘Wow, there’s clearly a disparity going on in this community.”’ 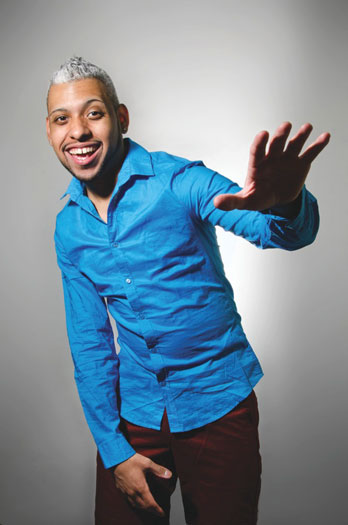 That disparity helped push King to choose a career focused on HIV prevention and care, particularly among gay and bisexual African-Americans, as well as queer youth empowerment and social justice.

”I’m definitely an advocate for youth,” says King, 24. ”I want to make them feel like they have a support system — an ally and an adult they can look up to.”

King, who got his start working as an HIV-prevention coordinator with the Supporting and Mentoring Youth Advocates and Leaders (SMYAL), now works at the Northern Virginia AIDS Ministry (NOVAM) where he leads retreats – known as RISE, for ”rewriting inner scripts every day” – for gay, bi and questioning men of color to address issues of self-esteem and internationalized homophobia.

King’s full-time work at NOVAM is actually just one of three jobs, plus school.

”I know a lot of people joke, because I’m always doing a million things within the community, that I’m a workaholic.”

King, who talks as rapidly as he obviously works, serves as a part-time research assistant at The George Washington University’s School of Public Health testing the efficacy of pre-exposure treatment to prevent the spread of HIV. He’s also a consultant on initiatives for gay youth of color at Children’s National Medical Center.

It’s this tireless devotion to his community that made King an obvious choice for a 2013 Next Generation Award.

Growing up in Herndon, Va., King wanted to be an actor — specifically, ”an actor in scary movies,” such as Friday the 13th and Nightmare on Elm Street. It’s a key reason he was attracted during high school to the nonprofit City at Peace DC, which uses performing arts as a vehicle for community building and social justice. There King helped develop theatrical shows based on real-life struggles.

”That’s what really opened my eyes to social justice and working in the field,” he says. ”I got to take my passion for theater and do it for social good.”

King was raised with three older sisters by his aunt and paternal uncle, whom he refers to as his mom and dad. He came out to his mom when he was only 16. ”I was tired of always hiding and sneaking around, saying I was going to the mall but I was really hanging out with the person I was dating at the time,” he says. King says his mother is now supportive, though his being gay is rarely discussed at home. While King has had a couple serious relationships, including one that lasted over two years when he was still a teenager, ”I’ve never gotten to a point where I’ve brought someone home.”

”That’s still an internal struggle for me, but I think I’m pretty much at that point where I’m comfortable with it,” he continues, adding with a laugh, ”Now I just got to find a man.”

Prior to his work in youth empowerment, King was an assistant manager at Lambda Rising, where he worked until the storied LGBT bookstore closed, in 2009. ”That definitely helped me in the work that I’m doing now,” he says, ”because gay looks a million different ways. Before Lambda Rising I thought gay looked just this one way.”

Acknowledging and respecting the diversity in queer identity is critical to King’s work with NOVAM in trying to reach youth struggling with sexuality and self-esteem. ”It’s easy to get in people who are out and comfortable with their sexuality and don’t mind talking about it,” he explains. ”But I think that there’s an element missing that’s really ignored many times, of those people who are still in that process of trying to figure out what’s going on with their sexuality.” Figuring out ways to reach such questioning youth is what King calls a ”work in progress,” though he’s finding success through the Internet and mobile apps such as Grindr and Jack’d.

King, who’s taking classes toward a degree in sociology at the University of the District of Columbia, is still unsure of his long-term career path. ”With each job I do, with each class I take, I’m getting closer and closer to really identifying what I want to do,” King says. ”But it’s definitely going to involve helping people within the community.”

Clearly his work has only just begun.