by Will O'Bryan
Photography by Julian Vankim
May 9, 2013

Thanks, in part, to high school years in the Junior ROTC in Forrestville, Md. – where she rose to the leadership rank of regiment commander – Je-Shawna Wholley was sitting pretty with a full ROTC scholarship to Texas A & M University. Something, however, wasn’t quite right.

”This was before the repeal of ‘Don’t Ask, Don’t Tell,”’ Wholley, 24, explains. ”I was the only black female there in my corps, one of two black people in my corps. And I was closeted.” 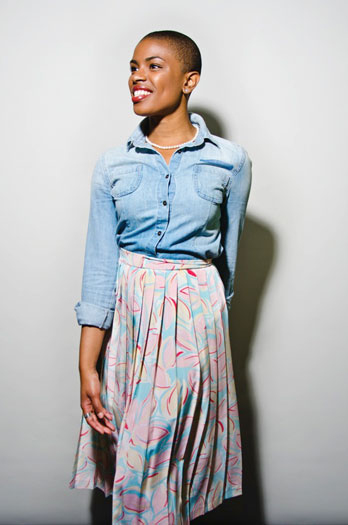 Having come out at 16, the conventional wisdom that college is the first place a young person gets her first real taste of freedom was turned upside down. Not only did college put Wholley back in the closet, she was finding it difficult to celebrate nearly any portion of her identity.

”I went from being in a very affirming place with people who looked like me, where I could be who I was, to being in this very dark-shadow place,” she shares. ”I was not happy.”

As stable as her ROTC scholarship may have been, Wholley made a choice. At this particular crossroad, she let go of security and took a chance on herself, enrolling in Spelman College, among the nation’s premier historically black colleges, in Atlanta.

In that short interim between Texas A & M and Spelman, however, Wholley faced another challenge back home in Maryland. As she walked her new puppy near her apartment, a stranger approached her. She fled to her apartment, but he broke in as she called 911. Though the assailant, armed with scissors, attacked her, she managed to escape as the police arrived.

”They found him, arrested him. I was convinced to enter into a plea. He served maybe two years for breaking and entering, but not for sexual assault. I was told that because he didn’t rape me, they couldn’t press those charges. It’s really crazy to hear, when you feel like you were violated in a real way, that because I fought back and this didn’t happen to me, that justice isn’t mine.”

What was hers, however, was her sense of being a survivor. How that may have influenced her time at Spelman would be very hard to say, but Wholley definitely became a force on campus. Stepping in to reinvigorate the campus LGBT organization, Afrekete, part of Wholley’s healing may have been to rekindle those leadership abilities forged in high school as regiment commander.

”It was an informal group of people who just wanted to be around other queer people and needed a safe space to do that,” she says of Afrekete when she joined the group. ”So, I took Afrekete and my biggest goal was to mobilize. I knew that we needed everything we were experiencing in this room, all of this energy that we had, we needed to make ourselves visible and force the campus to acknowledge us. And it was difficult. Some people were like, ‘That’s not what I signed up for.’ Toni Cade [Bambara] said this: ‘Make the revolution irresistible.’ She did that in her writing. I had to find a way to do that with organizing.”

And so she did, with Afrekete joining the ranks of sanctioned student groups, holding a pride week, and presenting a drag fashion show that directly — if playfully — challenged affiliated Morehouse College’s ”appropriate-attire policy” that forbade men from wearing anything that could be considered women’s clothing. In 2011, the national Campus Pride organization recognized Wholley’s efforts with its Voice & Action National Leadership Award.

Now in D.C. – and still keeping tabs on Afrekete – Wholley is continuing her campus crusade in her position with the National Black Justice Coalition as programs and outreach associate.

”The path I had into NBJC – volunteering, understanding what it’s about, and then making my own space in it – I can create that path for other people,” she says of NBJC’s Emerging Leaders Initiative. ”I’m all about making policy, politics, civic engagement and NBJC accessible and relatable to youth, making sure my peer groups see themselves in the organization, see themselves in the movement, and then feel empowered enough to mobilize in their own way.”

Mobilizing in her own way, Wholley is also interested in working with fellow survivors of sexual assault, as well as someday getting married and having kids. In the meantime, she’s got a movement to support as well as making sure she doesn’t burn herself out in the process.

”I am a young person trying to figure out what she wants to be when she grows up, dedicated to saving her own life and the lives around her,” she says with a charming wisdom, noting that the Next Generation Award is an unexpected surprise. ”It’s a shock, actually. You don’t realize who’s watching when you’re in the midst of moving and just doing what feels right, essentially just doing my job. I can’t say it’s going to make me work harder, but it’s nice to know you’re being seen. It’s humbling and it’s surprising. I didn’t even know anyone was paying attention.”