Star Trek is one of America’s greatest exports. Revered by millions worldwide, the sci-fi pop-culture phenomenon has dazzled fans for 50 years — and with good reason. From the original series with its automatic doors, turbo lifts and transporters, to the Next Generation, which gave us the concept of handheld computers long before Apple made them a commercial viability, Star Trek has inspired something within those who enjoy it. >The escapism, the idealism, the glimpses of technology beyond our reach, the vision of man as a pioneer in expanding the known universe — millions of viewers have wished they too could boldly go where no man has gone before. It’s why the concept of a Star Trek game is so perfect. To be able to create something that offers players the chance to step into the shoes of a Starfleet officer, to command a starship, to explore the galaxy and interact with new races is a level of interaction no book, film, or convention can offer. Star Trek, the game, is the latest in a long line of attempts to capture that dream, and, unfortunately, like so many games before it, it fails miserably. A bloated, buggy, badly-designed experience, Star Trek is shameful not just for its failure as a piece of Trek canon, but for its failure as a game.

At first glance, it seems to tick every box. Based in the universe of J.J. Abrams’s new Trek films, with its alternate timeline, Star Trek finds itself situated between the first film and the latest, Into Darkness, enjoying the rare privilege of being considered part of the official canon, given that the plot was developed in conjunction with the film’s producers. As such, the narrative plays a heavy role in the game, and seems to offer fans reason enough to play just to explore further the alternate universe Abrams and company have crafted. Deeper character insight and additional dialogue and canon-padding knowledge? That’s alone worth the price of admission for any serious Trek fan. 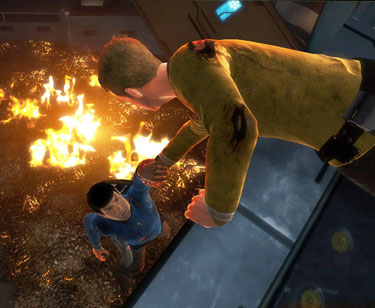 Aiding this are appearances by the main cast, with Chris Pine, Zachary Quinto, Zoe Saldana, Karl Urban and others returning to play their respective parts. The level of comfort the actors have with each other has increased notably since the first film, and even in voice-recordings they sound like a seasoned crew and less like the fresh-faced newcomers they were back in 2009. Pine and Quinto turn in the strongest performances as Kirk and Spock respectively, with their constant back-and-forth likely to delight fans who were waiting for the relationship made famous by William Shatner and Leonard Nimoy’s representations of the characters. Simon Pegg should also be noted for his turn as Scotty, with the Brit providing much of the comic relief outside of Spock and Kirk’s often playful bickering. Witty retorts, emotional speeches, reassurances of support, condemnations for ignoring advice — they’re all here, and the writing is one of the game’s strongest points. The characters feel real as they navigate the game’s worlds, commenting on environments, events, and one another.

It’s matched by one of the most appropriate scores I’ve ever heard in a game. Rather than craft brand new music, the developers took Michael Giacchino, composer of the film’s score, and handed him a 100-piece orchestra. The result? Every crashing symbol and dramatic violin sting feels as if it’s lifted straight from the film, and every sequence as though it’s playing to an audience of hundreds, with the player as the director. Running through the hallways of the Enterprise, the orchestra belting out an incredibly dramatic, bombastic rendition of the new theme, as phaser-fire bounces off walls, doors hiss open, boots clank on the ground and crewmen scream for help is the definition of immersion. Never before have I felt so much like I was playing a movie, just from the score.

Until, that is, I opened my eyes. Abrams’s films are incredibly polished. Lens flare, shallow focus, a clean, glistening sheen over everything — a visceral treat. Star Trek the game is the opposite. Yes, there is lens flare. Yes, the camera plays with depth-of-field. Yes, cutscenes are skillfully directed. The Enterprise is clean, clinical, with light bouncing from every surface. Standing on the bridge, watching the various screens dance as they throw information at their operators appears exactly as one would expect. That is, of course, if one were expecting it to look as though it had been dipped in vaseline and then trampled on. To say Star Trek‘s graphics are bad would be slightly cruel were this four years ago, and the game was released to tie-in with the franchise’s rebooting. In 2013, though, they’re bad. Really bad. Everything, and I mean everything, looks muddy. Characters, textures, environments, surfaces — all look out of focus and lacking in resolution.

While main cast character models are pretty decent, with accurate scans of Quinto, Pine, et al, every other character is noticeably lacking in detail. Early on, one of the game’s enemies grabs the player from a vent. The camera pans in close, but instead of reeling in fear at the alien, I was instead left both astounded and amused at the complete lack of texture on the character’s skin. And this was in a close-up cutscene. In-game, it’s even worse. Standing on the surface of one planet, with its sun-drenched, desert-oasis landscape should be a visual treat — instead, it’s bland, dull, flat. The homeland of the game’s enemy is awash in brown, beige and grey. It’s deliberately desolate, but the lack of detail in every screen makes it tiring to play through the chapter. Interiors are a mixed bag. Starfleet bases offer the same crisp, clean look of the Enterprise, but again the muddy textures mar any appeal. Enemy bases and ships are repetitive, and follow the same flat color scheme that wear the player down as they work through them. Given the vast expanse of the universe, did the game’s main enemies have to be the only ones to live on such a dreary, exhausting, drab planet?

Once you get over the environment, there are some pretty great setpieces to enjoy, with the designers clearly flexing their muscle and crafting several vast spaces in which to experience the action of the missions. Dense corridor networks, towering lobbies, laboratories, computer stations, engineering platforms, cargo bays — the various places that the game’s 10-hour story takes you are a delight to explore. Well, they would be, were they not crammed full of bugs. Be it doors not opening, characters getting stuck in walls, enemies jumping through cover or across gaps, certain sections simply refusing to let your character through, checkpoints not updating, or, as happened on one occasion, Kirk’s weapons and tricorder simply disappearing, leaving me defenseless in the middle of a battle, Star Trek is littered with game-breaking bugs. Many are annoying, such as the hit-or-miss nature of the game’s platforming sections, liberally and pointlessly borrowed from the Uncharted franchise, or enemies detecting you as you sneak past a floor below them in a sealed vent. Many are simply unforgivable — enemy AI will ignore you as you walk straight towards them while shooting, NPCs will block doors and ladders, the secondary character — either Kirk or Spock, depending on who the player chooses to be — will often run off, leaving you stranded as you wait for them to join you to advance the game. These are all things that should be polished out with testing and further development, but Star Trek instead feels rushed, unfinished.