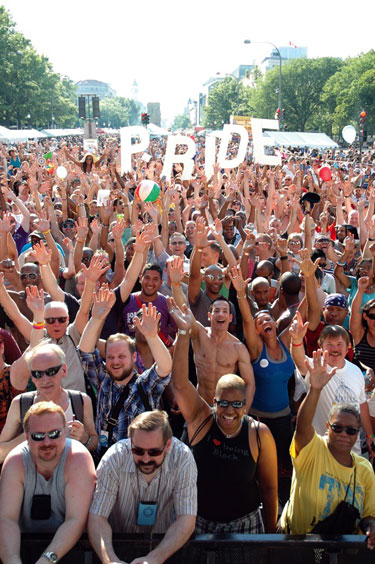 It’s not often that the Capitol gets mistaken for the Justice League’s Hall of Justice. Certainly, the George Washington University campus doesn’t look at all like the Xavier School for Gifted Youngsters. And even if there may be a bat or two hiding in the remains of the Dupont Underground, it’s no Bat Cave.

With Capital Pride’s 2013 theme, ”Unleash the Superhero in You,” D.C. will nonetheless take on a hint of Gotham City. Or, considering the Saturday parade’s ”super grand marshal,” maybe not so much Gotham as the island of Themyscira, birthplace of Wonder Woman.

”Maybe we should’ve called her ‘wonder’ grand marshal?” Capital Pride Executive Director Ryan Bos laughs, referring to the role Lynda Carter – primetime TV’s Wonder Woman from 1975 to 1979 – has with this year’s Capital Pride Parade. Whatever her title, Bos seems thrilled to have Carter join in the festivities and enhance the theme.

”I’m excited about the energy from the community,” says Bos of the build up to the June 8 parade and the following day’s Capital Pride Festival – build up that began just about the time that the 2012 festival wrapped up. ”We’re hoping that people really take advantage of our theme this year, come out in costume, have fun. But also really take the opportunity to network and really see the great work from the many organizations and businesses that are part of our community.”

There are also some changes to the parade and festival that might excite.

With the Saturday parade, the big change is a turn. Left, that is, on 14th Street, leading to the parade’s new ending spot at 14th and R Streets NW, versus the Thomas Circle end of recent years.

”There are a number of businesses that have sprung up along 14th Street, from P Street to where we’re going to end around R Street,” says Bernie Delia, chairman and president of Capital Pride. ”We think there’s an increased opportunity to have more people participate at that stage of the parade. The happy coincidence is that this year Whitman-Walker is the presenting sponsor of the parade, and we’ll be ending right there by their building.”

Whitman-Walker Health, the community health center with a special focus on HIV/AIDS and the LGBT community, is understandably excited about the new route. WWH released a statement June 3 sharing that excitement.

”We couldn’t be more excited about having the Parade come past our building at 14th and R Streets,” Don Blanchon, WWH executive director, says in the statement. ”For the first time ever, we get to lead the community to our home. And we hope that they will come back repeatedly to get the high quality health care they deserve.”

WWH’s Monday statement also details how the health center will be participating at the festival the following day. While WWH will offer free HIV testing and be signing up participants for October’s AIDS Walk, per usual, come June 9 visitors to Whitman-Walker’s booth can also get vaccinated for meningitis, which has reared its head in recent months in gay communities in New York and California. The vaccine will be offered for $150 per shot – with HIV-negative people needing one shot, two if you’re HIV-positive. WWH will also be explaining new aesthetic services, such as dermal fillers.

Capital Pride has its own changes set for the festival, the biggest of which is timing, shifting everything an hour later, with exhibitors running noon to 7 p.m., and the Capitol Stage going till sunset.

“We’re ending with a DJ in a dance tent,” says Delia. “We would like to make better use of our ideal location with the Capitol as a backdrop. It’s pretty impressive, and we want to take full advantage of that. So we’ll be having this party as the sun is setting [and] the lights are going up on the Capitol in the background.”

Time tweaks aside, it’s the stage that can make or break a big festival, and Delia is more than satisfied by what Capital Pride has put together for the Sunday showpiece.

”We’ve got three great headliners – phenomenal headliners,” promises Delia. ”We’re going to have a very packed Pennsylvania Avenue of people coming down to listen to Cher Lloyd, Emeli Sandé and Icona Pop. We’re very, very pleased we were able to secure them. Everybody’s very excited about them and the three finalists from RuPaul’s Drag Race, as well as a number of other acts.”

When it comes to hard acts to follow though, Capital Pride may be its own worst enemy, making its signature events bigger and adding more of them to fill the year. Come July, for example, Capital Pride will strike again with a party at Six Flags America in Maryland.

Bos adds that it takes money to keep the events coming. To that end, Capital Pride suggests festival attendees make a donation of $10 to $20 to keep the festival going strong.