Home / News + Politics / Poliglot / With Democrats and mainstream America on board, marriage fight turns to GOP

With Democrats and mainstream America on board, marriage fight turns to GOP 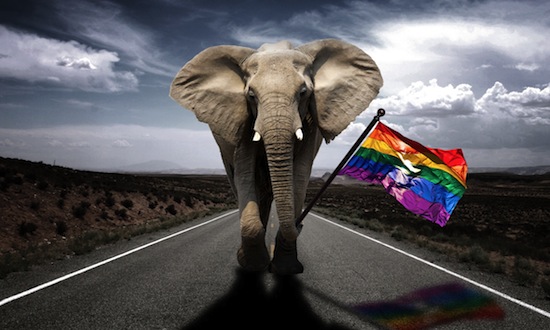 When the decision came down from the Supreme Court striking down Section 3 of the Defense of Marriage Act, there was no call to arms from the man who spent nearly $3 million defending the federal government’s definition of marriage as between a man and a woman.

“Congress passed the Defense of Marriage Act on an overwhelmingly bipartisan basis and President Clinton signed it into law. The House intervened in this case because the constitutionality of a law should be judged by the Court, not by the president unilaterally,” House Speaker John Boehner (R-Ohio) said in a June 26 statement, referring to the defense of DOMA in federal courts by the Republican-controlled Bipartisan Legal Advisory Group following the Obama administration’s February 2011 decision to stop defending the constitutionality of the law.

“While I am obviously disappointed in the ruling,” Boehner continued, “it is always critical that we protect our system of checks and balances. A robust national debate over marriage will continue in the public square, and it is my hope that states will define marriage as the union between one man and one woman.”

Although a reaffirmation of his belief that same-sex couples should not have the right to marry, it was a subdued statement from the most visible leader of the only branch of government partially controlled by a Republican majority. Moreover, it signaled the increasing divide within the Republican Party over marriage equality.

“There’s an acknowledgement there of the direction the country is going — that this is not a battle they want to fight because they know it’s a battle that they can’t win or, frankly, that they care to win,” Margaret Hoover, a conservative commentator and strategist and marriage-equality supporter, said of Boehner’s statement in an interview with Metro Weekly.

But while Boehner punted the issue back to the states and away from the steps of Capitol Hill, other members of his caucus pushed back. Rep. Tim Huelskamp (R-Kan.), along with 28 of the House’s more anti-gay Republican members, proposed an amendment to the Constitution dubbed the “Marriage Protection Amendment.” The proposed amendment is simple, consisting of just two sentences: “Marriage in the United States shall consist only of the union of a man and a woman. Neither this Constitution, nor the constitution of any State, shall be construed to require that marriage or the legal incidents thereof be conferred upon any union other than the union of a man and a woman.” But while a president once campaigned for re-election on such an amendment almost a decade ago, the likelihood of one becoming law today is close to none.

“Perhaps 10 years ago you would have seen Republicans walking in lockstep talking about judicial activism and the court’s overruling the will of the people,” Gregory T. Angelo, executive director of Log Cabin Republicans, told Metro Weekly. “What you saw instead was the only individuals who were speaking out and engaging in histrionics about judicial activism were really a minority of Republicans who are on a fool’s errand to try to pass a federal marriage amendment.”

Indeed, the House last voted on a similar constitutional amendment in 2006, when the amendment failed to reach the 290 votes needed for passage with a 236-187 vote. When that amendment was introduced on June 6, 2006, it had nearly 100 co-sponsors; Huelskamp had an initial 28.

“Some Republicans have not yet come to understand that this is the right thing for all of our country to do,” said Ted Olson, the conservative half of the star legal duo who fought California’s Proposition 8, during an appearance on CBS’s Face the Nation. “I think the day is going to come, maybe just in a few years, when the Republican Party, just like the Democratic Party and all Americans, believes in equal treatment for all our citizens.”

According to a recent Washington Post-ABC News poll, 56 percent of Americans agree with the Supreme Court’s DOMA ruling and 51 percent agree with court’s decision to let stand a lower court’s ruling to allow same-sex marriages to resume in California. Those numbers mirror national polls that consistently show slightly more than 50 percent of Americans support marriage equality.

Although 93 million Americans — nearly a third of the U.S. population – now live in one of the 13 states or D.C. that permit same-sex marriage, millions more live in states specifically prohibiting marriage equality.

Human Rights Campaign President Chad Griffin set an ambitious goal while speaking to reporters on the steps of the Supreme Court following June’s two landmark decisions, vowing to bring marriage equality to all 50 states within the next five years. For any such goal to become reality without a sweeping Supreme Court ruling, and with marriage equality already part of the Democrats’ platform, victory now depends on the Republican Party.

“All of the advances we have made either federally or in the states have come with Republican support,” said HRC spokesman Michael Cole-Schwartz. “It’s been our strategy from Day One, knowing that these issues are not going to be settled by one party, to work with allies on both sides of the aisle.”

There are 30 states that have constitutional amendments defining marriage as between a man and a woman, and the process for repealing such amendments varies significantly from state to state. The three different avenues for enacting such a repeal generally include a voter initiative to put the issue on the ballot; legislation approved by state lawmakers; and a constitutional convention. Some states require a combination of those three avenues. In nearly every case, particularly for efforts in what Hoover calls marriage equality’s “final frontier” — the American South — Republican support will be a necessity.

That is a reality not lost on activists. Following the Supreme Court’s June 26 rulings, the American Civil Liberties Union announced a 50-state and $10 million effort to bring Republicans into the marriage equality fold over the next three years.

“[F]or a full civil liberties victory, we need broad-based support from coast to coast. That’s why the ACLU is joining with Republican leaders to fight to end state-based limits on the freedom to marry,” said ACLU Executive Director Anthony D. Romero in a statement announcing the hiring of Steve Schmidt, a former adviser to Sen. John McCain’s (R-Ariz.) 2008 presidential campaign and President George W. Bush; and Jimmy LaSalvia, co-founder and former executive director of GOProud, as consultants.

It’s the latest in an outreach campaign by national LGBT-rights organizations that have been emboldened by polling that not only shows a shifting nation, but an upcoming generation that could dramatically change the landscape for equality. Another Washington Post-ABC News poll, released in March well before the court’s rulings, found 81 percent of Americans aged 18 to 29 support marriage equality with support among Republicans 18 to 49 years old standing at 52 percent. Groups like Young Conservatives for the Freedom to Marry, which operates under the umbrella of Freedom to Marry, have sought to organize young conservatives in order to send a clear message to Republican officials that voter demographics on marriage equality will continue to shift rapidly.

Following the departures of GOProud cofounders LaSalvia and Chris Barron late last month, the organization announced a new leadership team of three, all of whom are under the age of 30.

“The change in conversation is happening on both sides,” said Hoover, who has advised the American Unity Fund, formed last year by billionaire GOP donor Paul Singer to support Republicans who back marriage equality. “It’s happening on the side of traditional LGBT activist groups that are also realizing they need to engage Republicans. So it’s not like the onus is only on Republicans to change. The LGBT community has done an extraordinary job of adapting its message in a way that speaks to the fundamental principles of conservatism.”

What’s more, that messaging appears to be working and is slowly percolating from the local to the national level. Although there are a limited number of Republicans in Congress who support marriage equality — with Rob Portman (Ohio), Mark Kirk (Ill.) and Lisa Murkowski (Alaska) in the Senate, and Ileana Ros-Lehtinen (Fla.) and Richard Hanna (N.Y.) in the House — more than 220 Republican lawmakers at the state level have supported marriage equality.

Angelo says his experiences in New York during that state’s marriage-equality battle demonstrate that an LGBT rights coalition that includes Republicans will be necessary for a broad range of issues.

“I was chairman of Log Cabin Republicans of New York at a time when the common thinking was that in order to get marriage equality passed in New York state you were going to have to wrest control of the state Senate out of Republican hands and put it in Democratic control,” Angelo said. But even after that was achieved, the legislation suffered defeat in 2009, only to be approved two years later with the help of four GOP members of the Republican-controlled Senate.

“I think that unless we, as a movement, want to hit a wall,” Angelo added, “you’re going to need more Republican support.”