Blockbuster season may be ending, but great movies abound

Edgar Wright has done the improbable with The World’s End. His latest comedic homage is bigger, bolder and battier than Shaun of the Dead and Hot Fuzz — and at times, even funnier. Yes, funnier.

What’s interesting, though, is what’s hidden beneath the hijinks. Wright has often circled around ideas about conformity, lost potential and mortality. It’s the undercurrent of his work, even when it’s masked by jump cuts and whip-fast dialogue. The World’s End indulges a more bittersweet variety of these themes, quite unexpectedly turning a sci-fi comedy into a thoughtful movie about life and freedom. 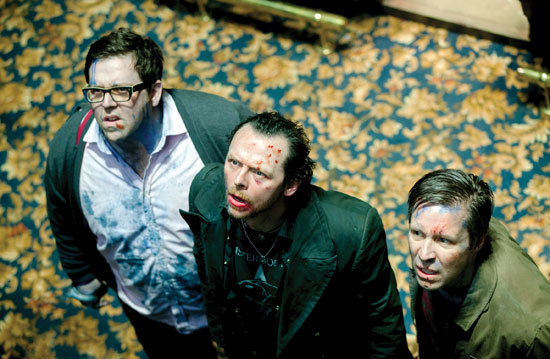 The protagonist of The World’s End — as much as he can he be called one — is Gary King (Simon Pegg), the self-proclaimed “king” of Newton Haven, a sleepy burg in the English countryside. Gary was the coolest kid in high school, but a severe case of arrested development has left him jobless, alone and estranged from his hometown friends. With a bit of the old slickster’s charm, Gary convinces those former friends — Andy (Nick Frost), Peter (Eddie Marsan), “O-Man” (Martin Freeman) and Steven (Paddy Considine) — to go back to Newton Haven with him, so they can attempt a debaucherous feat known as “The Golden Mile.” Twelve beers, 12 pubs, one night. This is how the world ends. Not with a bang, but a bar crawl.

After establishing each character, his story and his particular brand of distaste for Gary, Wright twists The World’s End in a familiar sort of way into genre-specific territory. Gary’s beloved Newton Haven is not what it appears to be, so between visits to fittingly named pubs like The Famous Cock, The Good Companions, The Trusty Servant and The World’s End, the boys end up running for their lives. I’ll leave it at that, since half the fun is finding out why.

It’s no accident that Wright set The World’s End in another suburban village, as he did in Hot Fuzz and (briefly) inShaun of the Dead. His distaste for orthodoxy and obedience manifests itself as Newton Haven, and with Gary, he’s created a jagged foil to tear it all apart. It’s funny, but that doesn’t make it any less bleak.

Perhaps that’s the point. This is the last chapter of Wright, Pegg and Frost’s so-called Cornetto Trilogy. They’ll work together again, but their incredible run is over. Now, they have no choice. They have to grow up.